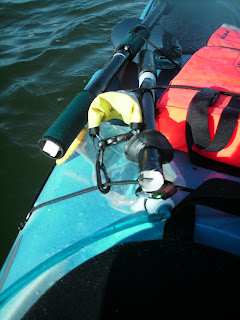 Last Saturday’s paddle was indeed a great day on The Great South Bay. As I briefly mentioned in my previous post, as we were leaving Fire Island for our return trip across the Bay I wanted “to paddle out ahead of the group so that I could take a few pictures with the sun at my back.” So “I planted my paddle for the start of a power stroke only to have the paddle snap in my hands!” Actually it was the paddle shaft that snapped, on the right side, near the drip ring.

I had originally written that “Admittedly the paddle was not an expensive one and nearly nine years old.” Actually, the paddle was over eight years old, having been purchased in may 2001 as part of a package deal when I bought my sit-on-top. It was a Cannon paddle. I am not complaining about it breaking since it has served me well over these eight and half years. On the other hand, should Cannon choose to replace it, I would not complain about that either.

As I noted in my previous post, “without a spare loaned me by Tony, I would have literally been up the Great South Bay without a paddle.” When my paddle broke, both Tony and John W. offered to loan me their spare. Tony was closest so I accepted his offer and finished the trip with his spare Warner, putting my broken paddle under the bungee cord on the bow of my boat (photo right).

That’s right. I was not carrying a spare paddle! I almost always carry a first aid kit, cell phone, VHF radio, bilge pump, paddle float, and many other “essentials”. More recently I have started wearing a tow belt as well. But I have NEVER carried a spare paddle.

I keep my paddle tethered to my kayak with a paddle leash so I do not have to worry about losing my paddle. But I never imagined that an aluminum shaft paddle would snap. Now I know. And now I will start carrying a spare paddle.

Soon after my wife and I purchased our kayaks I bought a couple inexpensive Rogue River Kayak Paddles distributed by Johnson Outdoors, but I never even took them out of their original packaging. I bought them “just in case” we lost our paddles or otherwise needed to replace them. I guess it is time I opened both packages.
Posted by John Edward Harris at 10:03 AM