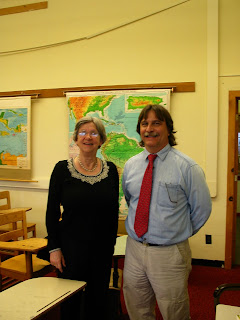 A link posted by Richard T. Berman on a LinkedIn Group alerted me to an article in The Chronicle of Higher Education and some good news about my Alma Mater, Davis and Elkins College. I was a student at D&E from 1976-1980. My wife was a student 1975-1979. She returned to serve as the College Chaplain from 1997-2007. I served as adjunct faculty, teaching Religion and Philosophy 2002-2007 and during that time was able to welcome the Reverend Dr. Johanna van Wijk-Bos as a guest lecturer in my class (photo right; Johanna is the one in the dress).

I can’t say I used the best criteria over thirty-five years ago when I chose to apply to D&E. My High School grades and test scores probably could have gained me admission to some top notch schools. But D&E offered some things top notch schools did not. It is related to the Presbyterian Church (U.S.A.) and I am a Presbyterian. It is located in the heart of West Virginia’s Monongahela National Forest, and being a West Virginian made some extra financial aid available while being in the heart of a National Forest meant I could be close to wild caves, wilderness areas for backpacking, and rocks for climbing. While at D&E I was in heaven. Well, almost!

D&E had less than 1,000 students when I was enrolled. None of my classes were over forty students. Some were only a dozen or less. I not only had the opportunity to go spelunking, backpacking and climbing but also served in Student Government, edited the College Newspaper, and earned credit for taking a National Outdoor Leadership School (NOLS) course in Wyoming the August between my Junior and Senior Year. And I still managed to graduate third in my class.

I am a firm believer in a Liberal Arts Education from small Liberal Arts Colleges. Such an education is not for everyone, but it was the right one for me. I am glad to read that after some tough years D&E is once again holding its head high.
Posted by John Edward Harris at 8:00 PM