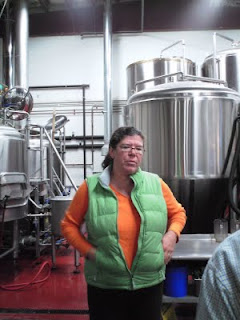 A week ago today, in the midst of a three day, two night mini-vacation on Cape Cod, my wife and I took a free tour of Cape Cod Beer. Located in Hyannis, Cape Cod Beer is the only microbrewery on Cape Cod. Having read about the free tour in one of those tourist books available at visitors centers, we arrived just a few minutes early for the Tuesday 11:00 AM tour. We were not disappointed, but then again, this was my first tour of a brewery of ant type.

Our tour was conducted by co-owner Beth Marcus (photo top right) who promised a 45 minute tour and delivered no less than a hour’s tour. As we were standing in the brew house looking upon stainless steel vats, (photo second from top right) Beth explained the brewing process in a way worthy of a high school biology and chemistry class. Her whimsical and entertaining delivery, however, was better than any lecture I ever received in High School, even without the complimentary beer tasting at its conclusion.

Cape Cod Beer opened for business at a previous location in April 2004. During the first year of operation there were 12 accounts, which grew to 125 by the second year. Today the Brewery services about 225 restaurants and 175-200 package stores. It employs seven full-time and two to four par 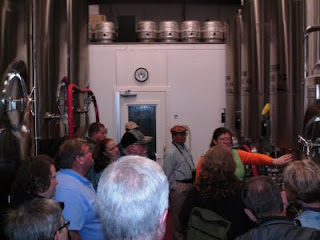 t-time staff, who handles all the manufacturing, packaging, and distribution from Plymouth to Provincetown.

My only regret after the tour was that I did not purchase a growler, but I could not justify the cost considering I do not live close enough to have it refilled. If I lived on the Cape or went there often I would have purchased one in an instant.

If you are considering taking a tour of Cape Cod Beer, which can be done on Tuesdays at 11:00 Am and Saturdays at 1:00 PM without making advance reservations, I recommend that you first take the much shorter self guided tour of the nearby Cape Cod Potato Chip Factory , enjoy your two complimentary bags of chips and perhaps buy a larger bag, and then arrive at Cape Cod Beer with a thirst. If you at all enjoy a good cold microbrew, you will not be disappointed.
Posted by John Edward Harris at 4:47 PM