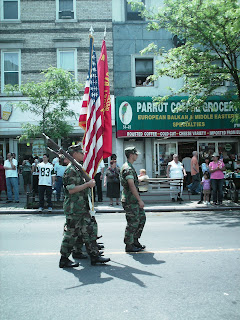 People who have not lived in New York City probably think it is one huge nameless, faceless, mass of humanity. At least that is what I used to think until I moved here nearly two years ago. In the past twenty months I have learned that the New York City is really a bunch of little cities, communities and neighborhoods. I know that Ridgewood is not unique, but Ridgewood is what I know best. Earlier today, if I had not known better, I would have thought I was in small town America, not a neighborhood of the largest borough of the country’s largest city.

Sitting inside the house I could hear the drumbeats even as they were approaching from blocks away. As soon as I realized that what I was hearing was the sound of marching bands in a Memorial Day parade processing eastwardly on Myrtle Avenue, I put the leash of my dog Hermes, grabbed my camera, and we went out to watch. The photo essay I have posted on Picasa is some of what I saw. There we no clowns in tiny cars or beauty queens on the backs of convertibles, no Shriners ridding mini bikes or floats promoting the latest whatever, just a lot of uniformed and plain clothed men and women, girls and boys, veterans and scouts displaying lots of American flags and pride as most of them marched in disciplined formation.

I think that in some ways what I watched could be considered part of the liturgy of civil religion minus the rhetoric. People were working to show their pride in being the mother, father, brother, sister, son or daughter of an American service man or service woman. Some of those marching were probably active duty. Some might have been ROTC. Many of them were probably children or grandchildren of immigrants, perhaps even the children or grandchildren of veterans who once fought and perhaps even died for another country, perhaps even a country at war with the United States. But today they were marching for America and as Americans to remember other Americans who made the ultimate sacrifice for this country.
Posted by John Edward Harris at 9:07 PM