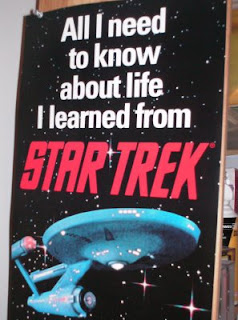 (No spoiler here) OK, the new Star Trek film has no subtitle. “The Premier Frontier” is my own idea and perhaps is more appropriate than forerunner, opening, prelude or prequel.

My wife and I are both Trekkers. We are not so hard core that we dress in costume and go to Star Trek Conventions. In fact we have never been to a Star Trek Convention. We do have all the movies on Video or DVD, have several books about Star Trek, and a decade or so ago visited the Star Trek exhibit at the Smithsonian Air and Space Museum. I have been a fan of all the Star Trek incarnations with the exception of Enterprise, which I personally think was a flop. In my home study/office is a poster of All I I need to know about life I learned from Star Trek.

Afterward I heard an older man asking two young boys under the age of ten (grandfather and grandsons?) what they thought about the film. From their answers I could tell they both really liked it.
Posted by John Edward Harris at 9:06 PM

Lorin and I saw it on Saturday with my mom in Pittsburgh. We both really really liked it and we will be seeing it again tonight with her mother. Cant wait to see it again and catch things I missed the first time.