Welcome To My Neighborhood: FIRE! 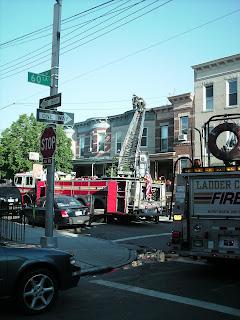 Rather than be awakened by my dog’s warm breath, cold nose, and incessant panting as usual this morning I was awakened by the sounds of sirens, more sirens than I am used to hearing. When my wife returned from walking our dog Hermes she told me there was a fire down the street and that I had better grab my camera and go take pictures for my blog.

The fire was a block away on 70th Ave. near the intersection of 60 La. Apparently there had been an electrical fire in a row house. I could smell a little smoke but could not see any. A free standing ladder reached from the street into a second floor window and a ladder truck’s ladder extended from the truck up to the roof. A few of New York’s finest would occasionally ascend up to the roof and descend back to the truck. The windows on the top (second) floor had all been knocked out.

While I remembered to grab my camera before leaving the house I forgot to grab paper and pencil and so could not take notes about what I saw, like the number of trucks, types of trucks, and first impressions. If a picture is worth a thousand words, you will have to read my photo essay of the pictures I took and posted on Picasa. My photos tell me that at least twelve unites responded, including 112, 124, 135, 140, 271, 277, 282, and 286.

From observation I learned that the various fire houses have nicknames, such a “Myrtle Turtles” for the house on Myrtle Avenue, and “House of Pain” for the house in or on Bushwick. My observations also left me with questions such as “What is a RAC Unit?” and “Why does a New City Fire Truck have a license plate from Montana?”

If you have been reading carefully you may have noted my non-sexist references to New York’s finest. I have refrained from calling them “fireman” and for a good reason. Near the conclusion of the photo essay you will notice a Lieutenant in a yellow turn-out gear. She seemed to have matters well in hand. She is just one of New York’s finest, women and men who stand guard to keep the greatest city in the world safe from fire and other emergencies.
Posted by John Edward Harris at 8:55 AM

Email ThisBlogThis!Share to TwitterShare to FacebookShare to Pinterest
Labels: FDNY, Fire, Ridgewood, Welcome to My Neighborhood