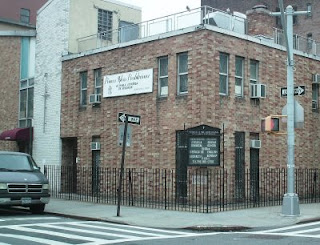 One the pleasure of living in New York City is the opportunity and ability to ride the Subway. Really! My wife needed the car most of the day but I was able to walk a quarter mile of the street, jump on the “M”, transfer to the “J”, and then from the “J” walk just a few blocks to the church. The one way trip cost me a whole $2. I could not have driven for less.

The approximate 160 in attendance (part of the crowd pictured middle right) were welcomed by NYCCPM President the Reverend Gilbert Sherman. The opening prayer was offered by the Reverend Michael Lindvall, Pastor of the Brick Presbyterian Church. Host Pastor the Reverend Jose Gilberto Gonzales-Colon, fresh off a plane from Columbia, brought greetings from the host church.

The Blessing of the meal was an example of the multi-cultural and multi-lingual nature of New York City Presbytery. Elder Chris Kim prayed in Korean. Elder Julio Damiani offered thanks in Spanish. A blessing in French was offered by Elder Emmanuel Goued-Njayick. An English language prayer was prayed by the Reverend Lonnie Bryant. 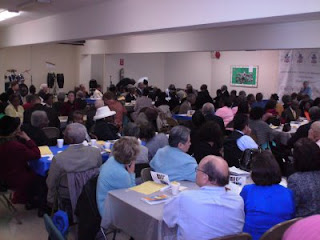 Not all in attendance, or providing leadership, were men. Prior to brunch being served we were treated to a musical offering by Violinist Sung-Eum Paik, a performance worthy of Manhattan’s finest performance venues.

The brunch of bagels, scrambled eggs, boiled eggs, sausage, hash browns and oatmeal was provided by the women of First Spanish Presbyterian Church.

One of my favorite artistic ministries in the Presbytery is Master Mine Ministry organized by elder Susan Wenn-Leach of the Church of the Master, and I was not disappointed when though liturgical movement they interpreted a contemporary Christian song.

The Reverend Dr. Victor Aloyo (pictured bottom right), Multicultural Relations Director at my Alma Mater, Princeton Theological Seminary, brought us the message for the day, “Long Road to Discipleship”. I loved his image of the Jordan River, beginning as crystal cle 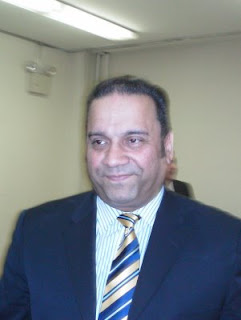 ar water in the Lebanon highlands, picking up silt and mud along the way as it flows in the Sea of Galilee. The Sea of Galilee is full of life, having sustained a small fishing industry that supports villages along its banks for centuries. The Sea of Galilee is so alive because just as it receives water from the Jordon it also gives it water back as the Jordan flows from the southern end of the sea until it reaches the Dead Sea, which is so full of salt and minerals that no life can exist in it. Thus if we want to be alive we must give as well as receive. If all we do is receive, without ever giving back, we will grow stagnate and die. At least that is what I think Victor was trying to say with this image of the Jordan.

Thirty leadership awards were presented by Presbytery Moderator the Reverend Margaret Orr Thomas and the Reverend Gilbert Sherman. Among the thirty was Elder John David Moser, Clerk of Session at North Church Queens, which is primarily why I attended, although I knew many other receiving awards.