Back in the Bay 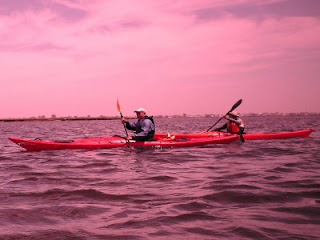 My paddling pals Tony and Walker (top right) invited me (bottom right) to join them for a Friday morning paddle in Jamaica Bay (the water in both pictures to the right). I was more than happy to accept. It had been five weeks since I had last paddled and seven months since I had last paddled in Jamaica Bay. It was my first time to launch from Sebago’s new dock. Nice!

It was a wonderful day to be back in the Bay. The water temperature at the dock was 65f, 58f-60f in the Bay proper. Air temperature at put in was 70f and rose steady as we paddled. The sky was mostly blue with a few wisps of cloud. I started off paddling in a short-sleeved rash guard and a long sleeved paddling jacket but took the jacket off after noon and paddled in short sleeves the rest of the afternoon.

I have paddled at low tide before but this low tide must of have been one of the lowest I have ever seen. Passing from Ruffle Bar to Paerdegat Basin with Canarsie Pol to the east, for the first time since I started paddling in Jamaica Bay a year ago I saw the remains of a wooden hulled ship exposed above the water. The following Day I was at Sebago when Phil Giller’s impromptu Saturday morning paddle returned and Phil said the low tide that day was also one of the lowest he had ever seen. 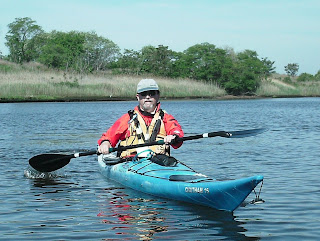 Friday’s trip took us to Floyd Bennet Field where we stopped for a snack and picked up a fourth guest paddler from Park Slope named Dennis, then south of Ruffle Bar to The Raunt where we stopped for lunch. Then we paddled South and West of Canarsie Pol back into Paerdegat Basin. I again paddled a Necky Chatham 16, which is still my favorite club boat.

I have paddled in Jamaica bay when it was calmer, windier, and warmer, during the day and at night when there has been a full moon, and yet the Bay still surprises me, like a low tide and a sunken ship to welcome me back home.
Posted by John Edward Harris at 11:35 PM