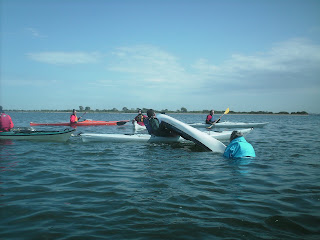 Fellow Sebago Canoe Club member and NOLS alum John Huntington distributed this link to a story about a rescue of boaters in windswept Jamaica Bay. There is also a follow up link to a story in the New York Post. The boaters were in a fishing boat, not a kayak. Nevertheless I think there is a lesson to be learned here.

I have paddled in Jamaica Bay when the there has been hardly any wind and the water was like glass. Likewise I have been out kayaking in the Bay when there was a strong enough wind over enough fetch to create white caps and standing waves over shallow shoals. The danger lies in calm condition luring inexperienced boaters out into the open bay far from shore only for the weather to drastically change for the worse with little if any warning, catching the boaters unprepared. This is why it is wise to know how to assist in one's own rescue as well as to assist others in being rescued and to practice such rescues (pictured top right) before they are necessary.

With six or seven years of paddling under my PFD, Jamaica Bay does not intimidate or scare me, but I still respect it because it demands respect. Becoming familair with rescue techniques is one way of showing that respect.
Posted by John Edward Harris at 10:47 PM