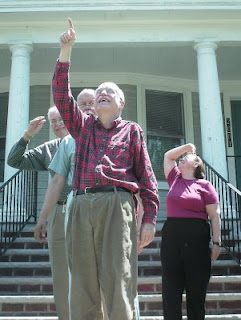 Why are all these Ministers Top right), all members of New York City Presbytery, looking up toward the wild blue yonder (bottom right)? They are not looking for a black monolith on the moon. They are looking at the heavens because today is Ascension Day.

Ascension Day is not the day Sir Edmund Hillary was the first person to ascend to the summit of Mount Everest. That will be May 29th. Nor is it the day Jim Whittaker was the first American to ascend to the summit of the world's highest mountain. That was May 1st. Ascension Day is the day Christians celebrate the resurrected Christ’s Ascension into Heaven, forty days after Easter.

Because this is Ascension Day, this evening North Church Queens and the First Presbyterian Church of Whitestone will be gathering for worship at 7:30 PM in the Whitestone sanctuary to read and hear once again Luke’s two slightly different accounts of the Ascension (Luke 24:50-53 and Acts 1:6-11), to sing hymns, to pray, and to celebrate the Sacrament of the Lord’s Supper. But there are problems.

In his Institutes of the Christian Religion John Calvin writes that carried up into heaven, Christ withdrew his bodily presence from our sight, not to cease to be present wit 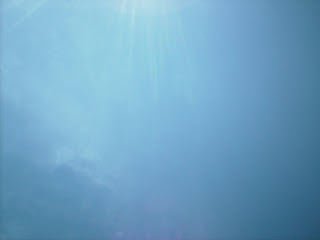 h believers still on earth, but to rule heaven and earth with more immediate power. By his ascension Christ fulfilled what he had promised: that he would be with us even to the end of the world. As his body was raised up above all the heavens, so his power and energy were diffused and spread beyond all the bounds of heaven and earth. Christ, by his ascent to heaven, opened the way into the Heavenly Kingdom. Over four hundred years after Calvin wrote those words. I wonder if it is possible to maintain this spiritual truth without retaining Luke's 2,000 year old understanding of the universe?

James Smart wrote in his The Creed in Christian Thinking "Sunday schools have been known to use a series of slides to depict the ascension, the first showing Jesus hovering in the air just above the heads of the disciples, the second and third showing him smaller and smaller as he ascends in the air, and the fourth representing him as a tiny figure disappearing into the clouds of the sky. The visual aid was quite effective in impressing upon the minds of Children a false and confusing conception of a spiritual reality.” It is time adult Christians grow up and leave behind such childish conceptions.

Marcus Borg argues that the meanings of the ascension story "are rich and important, even as it is one of the stories in the New Testament that most obviously requires a non-literal reading. . . . It is manifestly a symbolic or metaphorical story. . . . One reason we can not read the ascension story literally is that we cannot imagine it happening.” As Borg observes, "The issue is not whether 'miraculous' events happen. Rather, the issue is the 'three-story universe' presupposed by the story. Within this conventional ancient worldview, heaven is 'up above,' earth is in the middle, and Hades/hell is 'down below.'"

There were literalists and non-literalists in early Christianity as well as now. It appears that Luke, the author of the Gospel as well as the Book of Acts, was a non-literalist. Even if Luke was a literalist, however, since the time of Copernicus we have known that the earth is not flat. Heaven is not above or "up there" and hell is not below or "down there". The Earth is round, not flat. Our up is someone else's down if they life on the other side of the earth. There is no "up there". There is only an "out there". All this leaves us asking, with regard to Christ’s ascension, "Which way is up?"

Commenting on both Lukan accounts in his book Born of a Woman, John Shelby Spong wonders if the meaning of Jesus' ascension, as described in Acts 1, which in its biblical context assumed a three-tiered universe—a flat earth and a literal heaven above the domed sky—can be delivered from the words and thought forms of the era that froze that experience into such stringent and dated concrete images? Can space-age people escape the conclusion that if Jesus literally rose from this earth and even if he traveled at the speed of light, 186,000 miles per second, he has still not escaped the boundaries of this single galaxy?

Albert Curry Winn, in A Christian Primer, has noted that the actual story of ascension is not the record of a mission to outer space, complete with countdown and blast-off, but a reverent attempt to say that the post resurrection appearances of Jesus ceased and that the man Jesus is no longer a part of our space-time reality but a part of ultimate, final reality in the very throne room of God. Winn's explanation of Christ's ascension doesn't quite have the dramatic effect of Luke's accounts, or the poetic appeal of Calvin's explanation, but it still communicates the same spiritual truth without reliance on an outdated world view.

So how can and how do twenty-first century Christians observe and celebrate Christ’s Ascension without falling victim to a first century cosmology?
Posted by John Edward Harris at 12:08 AM