Reflections Upon Returning From Minneapolis 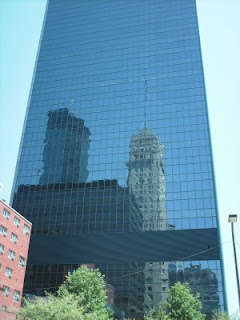 By meeting in the host city of the Next GA, Board Members hoped to acquaint themselves with the site with feet exploring the ground, eyes scanning the horizon, and taste buds tsampling local cuisine in addition to attending to regular Board business and continuing to fine tune the merger of the WS and VOS which was announced at the 218th GA in San Jose, CA.

Our meeting venue was the Best Western Normandy Inn and Suites, a clean and friendly establishment which offers milk and cookies to all its patrons at 10:oo PM. As far as we know the Best Western is not an Official GA Hotel but within an easy walk of the Convention Center. We also visited the Minneapolis Convention Center where the GA will be held and were impressed by the enormous size. I think this will be one of the better GA sites in recent years.

This was my first visit to Minneapolis and overall I was impressed. Except for the dust, mud, noise and other disruptions of downtown street work, which will hopefully be completed by next year, the city was clean and welcoming. I was particularly impressed by the system of Skyways which not only connect the convention center to major hotels but which like a spider web weave throughout the city connecting other hotels, office buildings, and shopping venues. Depending on where GA Commissioners and Visitors are staying, it might be possible to attend all the meetings and meals associated with the GA without ever going outside.

It should not surprise anyone that Board and Caucus members especially enjoyed the food and Gastric Gothic ambiance of Hell’s Kitchen, a site those coming to the GA will not want to miss. But we also enjoyed Bombay Bistro, which offers an affordable and quick Indian cuisine buffet lunch, and Key’s Café & Bakery at the Foshay Tower, an economical eatery with a fairly priced and varied menu and great deserts. All three establishments are within an easy walking distance of the Convention Center and most downtown hotels.

Over all, I think Presbyterians will be impressed by and feel welcomed by Minneapolis. For sure, the successor of the merged Witherspoon Society and Voices of Sophia will be there advocating for a less hierarchical and patriarchal and more inclusive, just, progressive Church and society informed by voices long silenced, especially the voices of women, GLBTQs, and people of color.
Posted by John Edward Harris at 9:51 AM