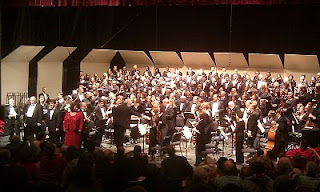 The Blizzard of 2009 did not deter the Oratorio Society of Queens. Their full rehearsal on Saturday afternoon started before the snow and was over before much of the white stuff had fallen. By the time of Sunday afternoon’s Annual Holiday Concert (photo right), most of the roads had been cleared. Still, even though it was a sold out house at the Queensborough Performing Arts Center at Queensborough Community College in Bayside, NY, there were blocks of empty seats in the auditorium, and it was not until moments before curtain call that the guest Soprano Geraldine McMillian, her flight and train detained by the winter weather, arrived. Those who made it to the concert had their hearts warmed by the Society, singing from the heart since 1927.

This is my wife’s third season with the Oratorio Society of Queens, which rehearses (with the exception of its final full rehearsal) at North Church Queens, where I serve as Designated Pastor. Singing First Soprano, this was also her third Annual Holiday Concert.