Getting a Handel on the Holidays 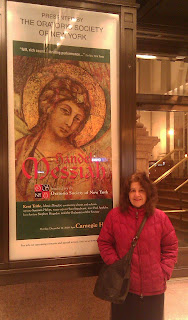 Do you think that when George Frideric Handel’s Messiah premiered in 1742 that he could have imagined attending a performance of it would become, for millions, a Christmas tradition?

Last night I attended, for the second year in a row, The Oratorio Society of New York’s performance of Handel’s Messiah, the complete work, at Carnegie Hall. My wife Vicki (photo top right), whose college major was Vocal Music, is one of the Society’s approximately 200 members, singing first soprano. This is her second season with the society and the second year she has sung in its presentation of Messiah.

The Oratorio Society of New York was founded in 1873 and has performed Messiah at Carnegie Hall every year since its opening in 1891 with the exception of 1960. Last night was its 200th complete performance. The performance was conducted by Kent Tritle. Susanna Phillips sang Soprano. Sara Sturdivant sang Mezzo-soprano. The Tenor was Paul Appleby and Stephen Hegedus sang Bass-baritone.

As the photo at bottom right might suggest, I was seated in the nose bleed section, the balcony third row back from the banister. I was seated so high and so close to the banister that I felt like I needed to be tied in to an anchor. At least I was seated near the center rather than off to the side, like last year. 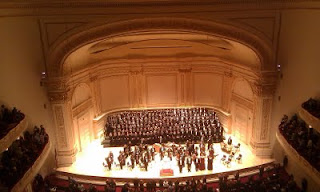 I am no music critic and my wife has all the musical talent in the family, but I think this year’s performance was better than last year’s. When I told my wife that I could not really hear 200 voices and that the performance sounded as if just a few voices were singing, she said that was good. She also overheard Conductor Kent Tritle remark afterwards that he thought this was the best performance in his fifth season as Music Director of the Society.

This coming Sunday I will be attending a performance of the Oratorio Society of Queens. Their program will include the first part of Messiah (the Christmas part) and the "Hallelujah" chorus but not the complete Messiah.
Posted by John Edward Harris at 11:11 AM

Thank you! (From Liz, who had the pleasure of sitting next to your wife for the performance!)

Thanks for your comment. Last year's performance was the first time I have heard the complete work. It is a shame most people do not hear the "Hallelujah" chorus in context.