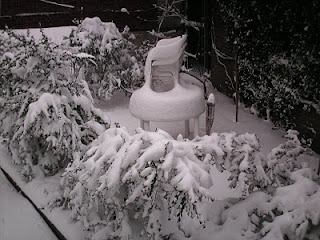 That is what it is being called, "The Blizzard of 2009". Here in the New York metropolitan area we received more snow in this single eighteen hour storm than all of last winter. With the wind blowing the snow around it was hard to get a reliable measurement of the snowfall’s depth. Nevertheless I measured between ten and twelve inches in our back yard (photo top right). That may not seem much by West Virginia mountain standards but around here it is a lot.

North Church Queens made the decision soon after 7:00 AM to cancel worship. Our winter weather cancellation policy is that if two of the following three people decide and agree to cancel, the service will be cancelled. The three people are the worship leader (in this case me, or a guest preacher if I am away), the Clerk of Session, and the Moderator of the Board of Deacons. Cancelling if two of the above three agree almost insures that a decision can be reached, even if one of the three people cannot be reached. 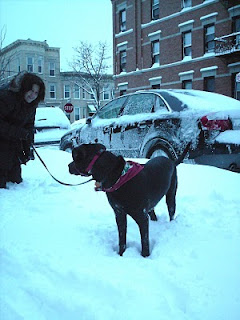 Considering that I live over twelve miles away from North Church, I did not mind not having to drive on the wintery roads yesterday, even though the snow had stopped and the wind had died down. There were still plenty of slick spots and many of the side streets were barely passable so, even though my Sermon was prepared, I was happy to stay off the roads.

The Ridgewood Presbyterian Church, where my wife serves as Pastor, did have worship. Since we live just around the corner from the church there was no question about the worship leader and preacher being able to make it. Eleven hearty souls also made it and so at 10:00 AM we worshipped together and I was able to worship with the Ridgewood Presbyterian Church and hear my wife preach for the first time in a long time.

The Blizzard of 2009 was our dog Myrrhlyn’s first snow fall. He was scared for about the first 15 seconds but quickly came to love it. He frolicked in the drifts, dug through the snow to make sure the dirt and sidewalk were still there, and attempted to catch and eat falling snowflakes (photo bottom right). Now, after the storm, he is enjoying finding and crunching on chunks of ice.
Posted by John Edward Harris at 9:53 AM