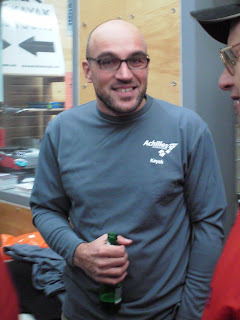 You might say that Marcus Demuth (photo top right) paddles to the beat of a different drummer. He first slid his torso into the cockpit of a kayak and took his first kayaking lesson in 2003. Most people, six years later, would be content to have progressed to serious paddling, but not Marcus. In the past six years he has circumnavigated via kayak The Falklands and Ireland. Now he and paddling companion Biff Wruszek (photo second from top) will soon be heading to the tip of South America where, as the Around Tierra Del Fuego 2010 Sea Kayak Expedition, they will attempt to circumnavigate Isla Grande Tierra del Fuego, estimated to be a 1,000 to 1,300 mile trip, the exact distance depending on how Marcus measures.

Marcus is both a racer and a an expedition paddler. He took first place in his class in the New York City Mayors Cup kayak race in 2009, 2007 and 2006. He recently circumnavigated the Falkland Islands after a failed attempt to paddle around Iceland the year before.

In was in 2007 that Marcus circumnavigated Ireland and also paddled in Australia. A year earlier he kayaked in Wales and Chili. In 2005 he stayed closer to his adopted home of New York City, travelling only as far as Canada for a good paddle. You can read about 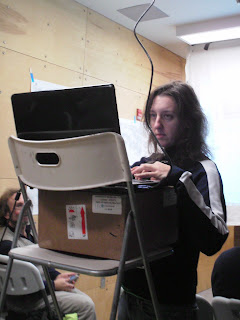 Last Tuesday evening, inside the spacious Manhattan Kayak Company and in midst of over a hundred kayaks of all shapes and sizes, Marcus and Biff talked about their trip preparation and expectations, presenting a multi-media program about the geography, weather, flora and fauna of Tierra Del Fuego. They also talked about their preparation and planning and the route they plan to paddle, including the obstacles they hope to overcome.

Marcus, the experienced expedition paddler, did most of the talking while Biff, a marathon runner new to expedition paddling, handled the multi-media, a reflection of how their personalities seem to complement one another. Having met Marcus before, I experience him as a warm hearted passionate man. Tuesday evening being my first time to meet Biff, I experienced her as thoughtful, reflective, and introspective. Perhaps Marcus will be the heart and Biff will be the head of this expedition.

The Around Tierra Del Fuego 2010 Sea Kayak Expedition will be a fundraiser for the kayak program of the Achilles Track Club. Appropriately, Joe Traum, the Achilles K 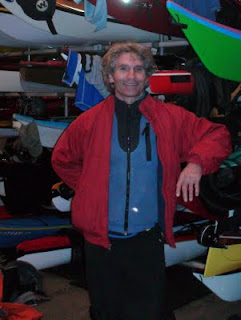 ayak Program Coordinator, was also present for the beginning of Marcus and Biff’s presentation and spoke briefly about the great work of Achilles.

The bon voyage presentation and party was fittingly hosted by Eric Stiller (photo third from top) and the Manhattan Kayak Company. It was at MKC and with Eric that Marcus took his first kayaking lesson, four hours of private instruction, back in 2003. Marcus now guides with MKC.

While Eric is himself an accomplished paddler and kayaking instructor he readily admits that when it comes to Marcus, "the student has surpassed the teacher."

I look forward to following Marcus and Biff's progress and to welcomming them back home after what I hope will be a safe and somewhat uneventful expedition.

With the kayaking resume Marcus already has under his paddle, I wonder what he might be planning as a follow up to Tierra Del Fuego. Perhaps he has heard that NASA has discovered water on the moon.

A few more photos from Tuesday evening's event can be viewed at my Picasa site.
Posted by John Edward Harris at 10:48 AM

Tierra Del Fuego!!! how romantic a name! i'm whisked away already. The Moon! well, why not?!

Tierra Del Fuego is a name that rolls off the tongue, leaving behind an exotic taste. Thanks for chiming in. I always love your watercolors.