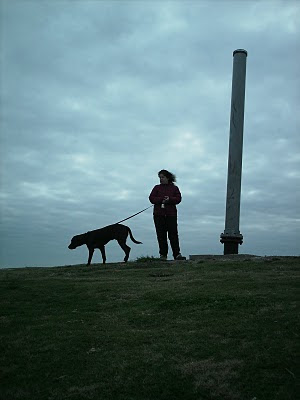 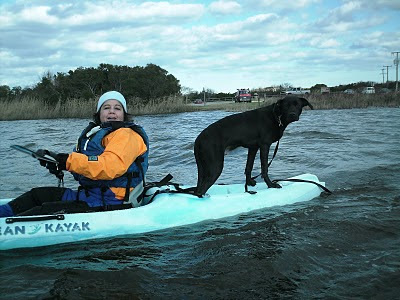 For a few hours Vicki and I liberated Myrrhlyn from Bayside Kennels, where we have been boarding him since Saturday morning. Our first stop was nearby Mount Trashmore, where Myrrhlyn bagged his first summit (photo top left). With an elevation of 60 feet, Mount Trashmore is perhaps one of the highest natural points in Virginia Beach, offering a commanding view of parkland, the Interstate, and nearby office parks and housing developments.

After descending from Mount Trashmore we drove southeast to our second stop, Back Bay National Wildlife Refuge, where Myrrhlyn experienced (I am not sure “enjoyed” would be the right word) his second kayaking trip (photo top right). We paddled only forty minutes and about a mile, and Myrrhlyn eventually found his way out of Vicki’s sit-on-top and into the water. With a little help he eventually climbed back into Vicki’s kayak. We then paddled back to the put in and called it a day.

After his summit to shore day, Myrrhlyn seemed relieved when we dropped him back off at the Kennel, as if he preferred to be in a warm and cozy kennel rather than climbing reclaimed landfills and swimming in cold brackish water.
Posted by John Edward Harris at 6:58 PM