A Summit to Shore Week from Hell 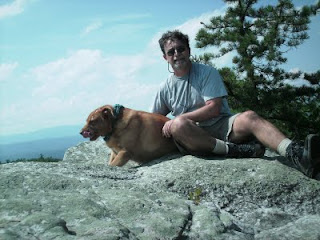 Monday, July 27 to Sunday, August 2, 2009 was a Summit to Shore week. July 27th was my first full day off from my two part-time jobs in over a month, so I took advantage of it by taking our dog Hermes up to the Mohonk Mountain Preserve at the Northern end of the Shawangunk Mountains and together we hiked up to Bonticou Crag, one of the more prominent natural features offering one of the most outstanding views in the Gunks, and a hike I had been wanting to do for a long time. A week later, August 2nd, after Sunday morning Worship, I was able to paddle a circumnavigation of Jamaica Bay with my paddling friend and water blogger colleague Bonnie. A summit on Monday plus a shore on Sunday equals a summit to shore week.

This summit to shore week was week from hell, however, and as some readers may have notice, I did not post an entry all week, because five to six hours after Hermes and I were sitting on the summit of Bonticou Crag (photo right), Hermes was dead. The hike up to Bonticou Crag from the Spring Farm Trailhead was a moderate three mile circuit. Hermes showed no signs of having any problems as we hiked up to the crag. We rested several minutes on top before heading down. On the way down, however, Hermes started to drag. Even though he had drank his fill of water and we were descending rather than climbing, he was moving more slowly, wanting to rest more often, and panting almost constantly. I kept offering him water and he would drink his fill. By the time we made it back to the car I had to help him up onto the tailgate and into the car. I let him drink his fill of water, turned the car air conditioning on full blast, and headed home.

Hermes was a veteran hiker. He had accompanied me on several day hikes in West Virginia's Otter Creek and Dolly Sods Wilderness Areas, to the top of West Virginia's highest peak, Spruce Knob, and back, including a mile plus bushwhack through brush and thicket, and the Gunk's Sam's Point Nature Preserve as well as the Mohonk Mountain Preserve. Many of our day circuit hikes were over ten miles. He had also accompanied me on two overnight backpacking trips in west Virginia's Dolly Sods Wilderness Area. He had his own pack and would often carry his own food and water, but not this day. Hermes was used to hiking in wilderness and mountainous terrain. Our most previous hike was a circuit around the Trapps, hiking the lower and upper carriage roads the day after Thanksgiving.

When we arrived home and I went around to the rear of the car to allow Hermes out I noticed that he had evacuated his bowels. I helped him from the back of the car onto the ground. He could barely walk the quarter block home and I had to carry him up the steps to the house and up the inside stairs to the bathroom, where I placed him in the bathtub and bathed him.

Carrying him into an air conditioned bedroom I placed Hermes on a couple towels on the floor underneath a window Air Conditioner. He was still panting and no longer wanted to drink let alone eat. I was hoping the refreshing bath and quiet, air conditioned room would eventually calm and soothe him. Eventually my wife Vicki came home from work, joined us in the bedroom, and sensed that Hermes’ condition was more serious than I suspected. As soon as Vicki joined us Hermes breathing almost immediately became more shallow and slower and then he experienced some spasms, as if he was going to throw up. I went into another room to call the vet and while I was on the phone Vicki yelled to me that she though Hermes had died. I came back into the bedroom and confirmed it. We both broke out in tears.

Our best guess is that Hermes suffered a heart attack even though he was not yet five years old. He was a rescue and we knew nothing about his lineage or the first few months of his life and it is possible he had a congenital condition we did not know about and the vet had not detected. I will certainly be writing more about Hermes at a later time. For now I simply note that both Vicki and I miss him. While no other dog can ever replace him we are investigating nearby animal shelters for a dog in need of adoption that might bring some the joy and companionship into our lives that only a dog can.
Posted by John Edward Harris at 9:08 AM

Thanks, Katie. We appreciate the sentiment.