Former Students on the Web 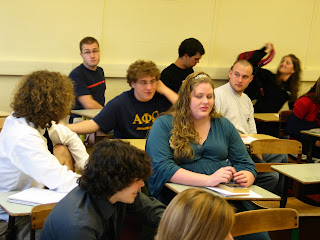 Did Socrates take any pride in Plato? Was Plato proud of Aristotle?

From the fall of 2002 through the spring of 2007 as adjunct faculty I taught one Religion or Philosophy Course (some former students pictured at right) a semester at Davis and Elkins College, a small Presbyterian Church (U.S.A.) related liberal arts college in the mountains of West Virginia. The course I taught most often was Introduction to Philosophy, in which I tried to employ the Socratic Method to draw my students out of the cave of unenlightened ignorance into the daylight of informed self-critical reality.

Perhaps the greatest reward of teaching is to see students and former students grow and mature. I am aware of at least three of my former Introduction to Philosophy students currently on the web and as their former teacher I proudly highlight them here. Check them out and let them and me know what you think about their work.

Tim Armentrout describes his blog breath made visible as the blog of a “West Virginia guerrilla mountain poet” whose writing “is primarily spontaneous and goes largely unedited.” His photos remind me of our shared home state and his poetry expresses the edgy feel of a critical, irreverent but thoughtful and self reflective young adult unwilling to accept the status quo. Tim started blogging in May 2006.

Eric’s Blue Reverie is a somewhat eclectic blog that Eric Stover started in May 2009. Eric describes himself as a smart ass but I think of him as a young, budding entrepreneurial free thinker just now finding his niche in the world. I am looking forward to reading where Blue Reverie goes.

I do not think of Vince LeGreco as a blogger per se but as the creator of the online “OH-NO Comics Featuring Whiskey Falls” which soon move to its own site at http://www.whiskey-falls.com/ Vinnie’s illustrations remind me a bit of the Simpsons. His subject matter appears to focus on uncovering the absurd and median of everyday life with a bent toward some self-effacing humor and a tinge of social criticism.

I invite any other former students of mine currently on the web to let me know of their presence, or to alert me in the future if they start blogging.
Posted by John Edward Harris at 10:06 AM

Thanks for all the support John and the nice write-up. I should mention that I enjoyed your Philosophy course at D&E and thought that the book Sophies World was a great way to teach us Philosophy.

I'm glad I discovered Sophie's World as I was looking for a text for the class and that I ended up using it. It was, after all, a novel approach to teaching philosophy. I miss teaching and the interaction of the classroom.