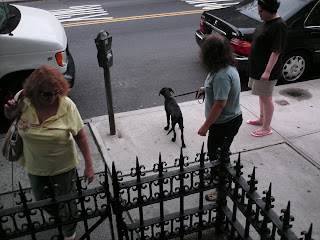 Myrrhlyn came to live with us Thursday. He was being sheltered under the name “Dusty” at Wilma’s Orphan’s Inc. “Dusty” was also Hermes’ name when we adopted him and Wilma was my mother’s name. More synchronicity?

We went to visit Wilma and Dusty a week ago. After our visit Wilma processed our application, contacted our references, and approved us adopting Dusty. 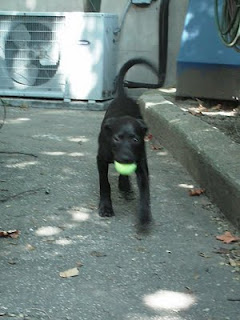 Wilma delivered this cute bundle of canine energy Thursday morning. The photo of Myrrhlyn at right is not the best picture but it is the first, taken as he was approaching our home.

We had been thinking about names and had narrowed the choices down to three or four but decided to wait twenty-four hours after Myrrhlyn came to live with us before finally deciding. He have chosen a Welsh variation of the name of the magician, seer, and teacher of Arthurian Legend, a variation which also alludes to one of the gifts of the Magi to the Christ Child, a gift often used for the embalming, funeral incense, and Christian liturgy. The Welsh variation also recognizes our love of Celtic tradition and lore as well as interest in Celtic Christianity.

Myrrhlyn has been with us for nearly 48 hours. He is affectionate, intelligent, has a lot of puppy energy, and has had very few “accidents” in the house. His vet records estimate that he was born March 24, 2009. He appears to be a Chocolate Lab but is certainly a Labrador Retriever Mix.
Posted by John Edward Harris at 8:23 AM