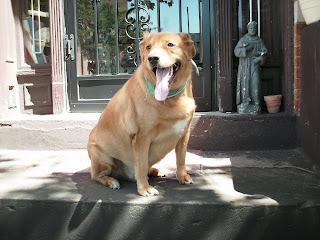 Over two weeks have passed since our dog Hermes (photo right) died. Though I have previously posted to this blog about his death I have procrastinated writing a suitable tribute. Perhaps I have been hoping that as more time elapsed between his death and my writing this tribute that the interim would either offer me more perspective or lesson the grief, or both. Now I am confronted with the likelihood that a puppy will be coming into our home within days. While no dog can ever replace Hermes, I think I need to cathartically write now rather than later in order to make some psychic space for the fourth dog in our life.

Hermes was rescued along with another dog from under the porch of an abandoned house during a snowstorm by Andrea in January 2005. Even though Andrea and her soccer coach husband Matt already had two small children and two dogs, they took Hermes in, and called him Dusty. Andrea and Matt took Dusty to a vet for his shots, hoping to find him another home.

A few months later a few young women from the soccer team at the college where my wife served as Chaplain brought Dusty to a Blessing of the Animals Chapel Service. Dusty and my wife almost immediately connected. He came to our home shortly after for a trial visit. By the next morning I had renamed him Hermes, after the talking dog Character in Jostein Gaarder’s #1 international bestseller Sophie’s World. I was teaching undergraduate Introduction to Philosophy at the time as adjunct faculty and had been using Sophie’s World as the primary text. The rest, as they say, is history.

Hermes was not a good dog. HE WAS A GREAT DOG. Our Hermes never talked to me in this life, except with his love, companionship, loyalty, protectiveness, and barks, but it seemed that his vocabulary of words he could understand when we spoke was constantly increasing. He was fiercely loyal and protective. He was a good, well behaved puppy and a great companion on a lot of hikes in West Virginia’s Otter Creek and Dolly Sods wilderness area as well as New York’s Shawangunk range. He went backpacking with me at least twice, and car camped with us at the Cape Hatteras National Seashore campground on Ocracoke Island, NC.

It is said that tragedy and bad news comes in threes. Not long before Hermes died our good friend Whitney’s dog Ellie died. Elle and Hermes were doggy friends. A couple nights before Hermes died, Ellen’s dog Nina died. Ellen is a member of the church I serve and her dog Nina would often come with her to church events, so in many ways Nina was a canine friend of the congregation. Hermes death was the third death of a dog we knew in the period of just a few weeks.

I do not at all believe in superstition but as an amateur Jungian I do place some credence in synchronicity. While Hermes’ death being the third death of a canine we knew in a matter of weeks might be counted as coincidence, I cannot count as mere coincidence the fact that Hermes died two years to the day after he moved to New York City. Nor can I ignore the fact that the day after he died a thief stole a statue of Saint Francis (far right in photo at right), patron saint of animals, from off our front stoop. What I am supposed to learn from all this has yet to be discerned. Meanwhile, my wife and I still have not made any decisions about where to scatter Hermes ashes. There is still time for that.

In preparation for writing this post I have read, for at least the third or fourth time in the past thirty five years, John Muir’s classic short story and tribute to a dog named Stickeen, a dog that travelled an Alaskan glacier with Muir in 1880. Unlike Stickeen, Hermes never crossed a narrow ice bridge over a glacier’s crevasse. Hermes did, however, cross streams by walking and swimming, scramble up rocky slopes, and sit out thunder storms with me as together we hiked and backpacked. Thus, in the spirit of Muir and borrowing Muir’s words about Stickeen, I fondly and teary eyed write about and in tribute to Hermes “Doubtless he has left this world—crossed the last crevasse—and gone to another. But he will not be forgotten. To me [Hermes] is immortal.”
Posted by John Edward Harris at 9:21 PM

I was sorry to know that Hermes is no longer with you guys and hope that your new little one can bring you joy!

Thanks, Vickana. Myrrhlyn is keeping us busy and entertained, but we still miss Hermes.