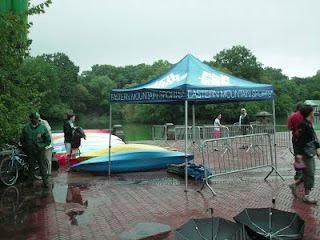 In a rain that alternated between drizzle and steady we unloaded kayaks off the Confluence Watersports eighteen wheeler, ripped and cut the plastic shrink wrap off brand new kayaks, carried kayaks and steel barriers from Bethesda Terrace down past Bethesda Fountain, and set up the Confluence & Eastern Mountain Sports Paddle Sports Center (photo top right) near the lake at Bethesda Fountain. It was all part of the fifth annual “Adventures NYC” hosted by the New York City Department of Parks and Recreation and “Backpacker” Magazine.

Being hearty outdoor types, most of us were wearing waterproof rain jackets or paddling jackets as well as hats but were starting to feel chilled in the wet morning air. Goosebumps could be seen on arms and legs. As the noon opening time approached, we were all wondering how many people would brave the elements in order to kayak in Central Park. 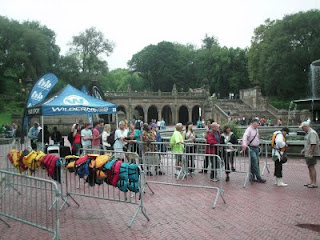 By 1:00 or 1:30 PM the rain had stopped. While the Sun never really came out, the sky did brighten, the air warmed, and our jackets and hats started coming off as we started warming up. While a few brave paddlers ventured forth to paddle in the rain, once the rain stopped a crowd started lining up (photo at right second from top) to sign the wavers that would allow them access to the Paddle Sports Center and to kayak in Central Park. 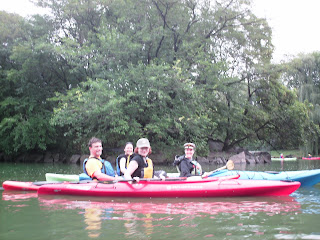 My job from noon till 4:00 PM was to hand out paddles (photo right, fourth from top) and offer a brief introduction on how to hold it. With paddles ranging from 210cm, 220cm, 230cm and 240cm I tried to size up paddlers as they approached and to give them the best paddle for their size, but as my inventory began to dwindle I sometimes gave paddlers the only size I had regardless of their height. At least twice during the day I totally ran out of paddles and had to wait for paddlers to come in off the lake before I could outfit people waiting for a boat.

At 3:30 PM we closed down the waiting line but allowed anyone already in line to paddle, even past the 4:00 PM closing time. Between noon and 3:30 PM we had 375 people sign waivers, and most of them paddled (photo right, fifth from top). This was 125 people bel 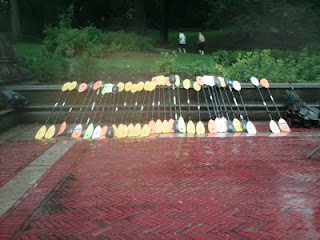 ow last year’s 500 paddlers but still respectable considering the weather. Paddlers ranged in age and experience. Some paddlers were as young as five and controlled their boats better than some of the adults. Several families chose to paddle tandem kayaks. At least one dog ventured forth onto the water with its human companion.

At the end of the day, as boats became available, those of us who had been working off the water during the event by having people sign waivers, assigning and fitting PFDs, handing out paddles, or getting people into boats were given the opportunity to paddle. I grabbed one of the first boats available, a Wilderness System Tsunami 120 or 125. Classified as a Touring boat I would have preferred something longer and in the Sea Kayaks classification but did not want to wait until one became available. 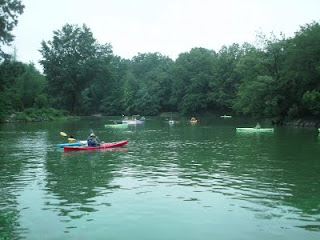 I had paddled an old Wilderness System Sealution for a short distance on Jamaica Bay and liked it, so this was my second time in a Wilderness System boat. The newer Tsunami definitely shows some R&D improvements. Paddling the Tsunami I passed under the Bow Bridge to the larger western side of the lake and then came back under the Bow Bridge and paddled to the Loeb Boathouse, then back to the fountain area. I was probably on the water for no more than half an hour, but it was a half hour of kayaking in Central Park!

In spite of the rain I had a fun day interacting with the public and helping introduce many of them to their first kayaking experience, as well as becoming acquainted with Eastern Mountain Sports Guides from other stores, Eastern Mountain Sports management, and representatives from Stohlquist and Confluence Watersports, plus a few others (more in later posts). The day was just one more reminder why New York City is the greatest city in the world in which to live and work, and why kayaking is one of my passions.

You can view my other photos from the Adventure NYC day and the Confluence and Eatern Mountain Sports Paddle Sports Center at my Picassa album.

Posted by John Edward Harris at 11:01 AM