In Memory of Ken Ragbir 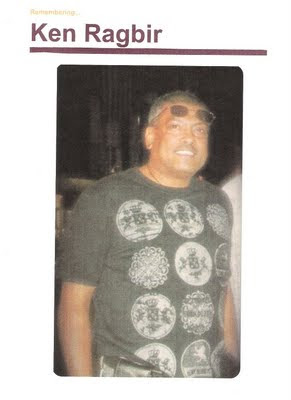 Some of you may remember him as a friend…the all out good-time party guy…
Some of you may remember him as a loved one…always the one to make you laugh out loud and share a story (me ah soon come), a hug and a smile in good and bad times…
His daughter Ashley will always know how much he truly loved her…
His mom Lilia and dad Joe will always know that as their only child he was a true treasure in their lives…the diamond that glittered in the snow, the gentle autumn rain, the soft starlight at night…
…if tears could build a stairway and thoughts a memory lane, we would walk up to heaven and bring you home again…
Since you will never be forgotten we ppledge to you today a hallowed place within our hearts in where you will always stay
Lord put your arms around him, don’t leave him on his own, for today he is far away, his first away from home.


* * *
Peace, my heart……
Peace, my heart, let the time for the parting be sweet.
Let it not be a death but completeness.
Let love melt into memory and pain into songs.
Let the flight through the sky end in the folding of the wings over the nest.
Let the last touch of your hands be gentle like the flower of the night.
Stand still, O Beautiful End, for a moment, and say your last words in silence.
I bow to you and hold up my lamp to light you on your way.
- Rabindranath Tagore
* * *

Om asato maa sada gamaya
Tamaso maa jyotir gamaya
Mrityor ma amrit m gamaya
O Lord, save me from the path of untruth and lead to the path of truth,
From darkness of ignorance lead me to the light of knowledge,
Save me from disease and death and lead me to immortality
* * *

We all have different journeys,
Different paths along the way,
We are were meant to learn some things,
But never meant to stay.
Our destination is a place,
Far greater than we know,
For some the journey’s qwuicker
For some the journey’s slow.
And when the journey finally ends,
We’ll claim a grat reward
And find an everlasting peace,
Together with the Lord.
* * *

In lieu of flowews. You may make donation in Ken’s name to one of the following charities:

The road sometimes rough but once said he aint heavy
I knew of a good-hearted man, they called him Kenny
Poised in his ways, grounded firm in his stand
Fully in control of his will, afraid of no man
In seconds to the signal, he was ready set, go
Never an excuse of how high or low
He brought so much laughter, never requiring an applause
Always open to listen obediently to the cause
A bit too outspoken, but never worried about the consequence
For the wisdom of his age, he always knew what would make sense
But on that dreadful Sunday evening, his judgment destined his fate
Og the pain is too unbearable, why couldn’t this day wait?
But the last chance he took was favorless to brave
He miscalculated his perception, his memories went vague
An out of body experience, yet his presence can be felt
He left in our memory his greatest wealth
And though out of sight yet bounded deep within
Ken will always be remembered, as a great human being.

Written by Jimmy Seenath on behalf of R&M Ambulette Crew
* * *
The phot at top right as well as all the text above were provided by Ken's family and friends. I did not know Ken in life but have come to know him in death. Through the chance circumstances of time and place, the power of the internet, invitations from strangers offered and accepted, strangers willing to trust and reach out, I have come to know a total stranger after he tragically died in a motorcycle accident on the Van Wyck Expressway in Queens on June 14, 2009. As a result the vastness and anonymity of New York City has become more personal and smaller. Namaste, Kenny.
Posted by John Edward Harris at 10:15 AM