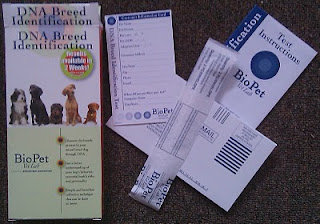 The waiting is over. Yesterday I received my DNA Breed Identification from Bio Pet Vet Lab. I still do not know anything about the identity of my Daddy or Mommy but according to Bio Vet Pet Lab’s analysis of my DNA, I am 37-74 % Australian Shepherd, 20-36 % Boston Terrier, 20-36% Brittany, and 10-19% Bull Terrier. Who Knew? Apparently, through a strange quirk of genetics, I only look like a Chocolate Lab.

We (that is my human companions and I) think that my diverse genetic ancestry is very appropriate for a Dog living in the New York City Borough of Queens. After all, Queens is one of the most, if not the most ethnically diverse community on earth and where people as well as dogs from various genetic backgrounds are perhaps mixing DNA as never before.

In case you are wondering what the Bio Pet Vet Lab DNA Breed Identification test kit looks like, there is a picture of the packaging and the contents at the upper right. As advertized, it took about three weeks from the date we mailed off the cheek swabs until we received the results.

By the way, the Australian Shepherd, according to the American Kennel Club, developed in the Pyrenees Mountains somewhere between Spain and France. Again, according to AKC, The Brittany was named for the French province where it originated. There is a great deal of resemblance between the Brittany and Welsh Springer Spaniel, which leads many people to believe that the two breeds share the same ancestors. It is possible that native Brittany spaniels mated with English pointing dogs around 1900. That means I do indeed have some deep Celtic roots and so my name is still appropriate.
Posted by John Edward Harris at 10:43 AM