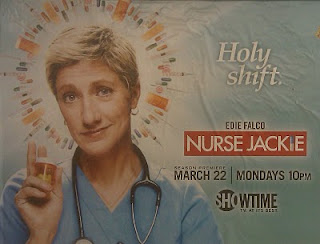 Last Friday and Saturday my wife and I spent more time than usual riding the New York City subway, making two round trips between the Halsey Street station on the “L” line and the 155th Street Station on the “A” line. During our commutes it seemed like every station we passed through had one or more wall advertisements promoting the Showtime Series Nurse Jackie, starring Edie Falco (photo top right).

The advertisement first caught my attention when I noticed the phrase “Holy shift”, an obvious allusion to a more profane sentiment. After a more focused study I realized that syringes and prescription bottles arranged around Nurse Jackie’s head formed an obvious halo and that her right hand formed the traditional gesture of blessing. Holy shift, indeed. The advertisement suggested that Nurse Jackie was a saint and that if you watched the show you would be blessed. 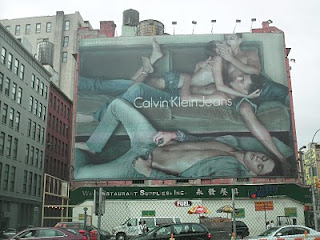 In the advertizing capitol of the world, where sex is used to sell nearly everything, but where a Calvin Klein billboard depicting four nearly naked young nymphs wearing nothing but CK jeans, three of them apparently engaged in Ménage à trois while a fourth reclines on the floor (photo bottom right), offended even some New Yorkers, it was refreshing to see an advertisement employing religious symbolism and appealing to faith and spirituality in an attempt to promote a cable sitcom.

“Holy shift” certainly is an eye catching, but not particularly religious, phrase. It might catch the attention of secular New Yorkers and invite them to smile or even chuckle at the wordplay, but a nimbus? A hand gesture indicating liturgical blessing? How many New Yorkers and visitors to the Big Apple, perhaps not necessarily familiar with classic western art, would miss or not understand the significance of the aureole? How many non-Christian or secularists who have never been exposed to Christian Iconography would fail to recognize and understand the symbolism of the right hand with the last and ring finger against the palm and the two other fingers and thumb raised? Or are these archetypal symbols tapping into the collective unconscious and speaking across cultures as well as religions?

While some Christians might be offended by the Nurse Jackie ads, I find them refreshing as well as provocative, but provocative in different way than sparsely clad young nymphs making out while wearing nothing but their name brand jeans. When religious symbolism and Christian Iconography is employed by a marketing firm to communicate a commercial message in a secular culture, how much more so can they be used to communicate the Gospel?
Posted by John Edward Harris at 5:38 PM

Iconography, indeed! This billboard really looks like one of the Christ Pantocreator icons to me. Very interesting and eye-catching ad. I've never watched Nurse Jackie so I don't know how much truth there is in this advertising ;-)

Nor have I seen the Nurse Jackie series. We subscribe to HBO but not Showtime. "Truth in advertising"? Is that not an oxymoron?