The Best Shorts Ever 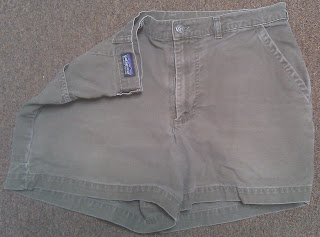 Now that daytime highs are remaining between 50-70°F I have been enjoying wearing my favorite apparel, shorts, but not any shorts, Patagonia brand Stand Up Shorts (the ones with the 5” inseam, not the 7” inseam), in my opinion the best shorts ever. A well worn pair, several years old, appears in the photo to the right.

Patagonia claims that their Stand Up Shorts have “been around for 30-plus years” and I believe them. I purchased and starting wearing Patagonia Stand Up Shorts in the late 70’s, perhaps as early as 1976 or 1977, usually owning three or four pair in various colors at any one time. I have since worn them rock climbing, backpacking, day hiking and as general casual wear. I usually retire them long before they wear out only because they have acquired unsightly stains I have not been able to remove. A few pair, however, have bitten the dust through wear and tear, but only after years of use and abuse, usually fraying at the bottom hem or just below the front pocket in the leg crease. On average, a pair of stand up shorts probably stand up to my abuse and use from three to five years, maybe longer.
Few products, certainly few items of apparel, remain on the market as long as these shorts have been available. I think of them as the Volkswagen Beetle of apparel: basic, no frills, well designed, offering good value for the money, and built to last. And I should know what I am talking about as I used to own and drive two used 1972 Super Beetles, driving them well into the late 80’s. I hope that unlike the VW Beetle, Patagonia brand Stand Up Shorts will be around another 30-plus years.
Posted by John Edward Harris at 9:35 AM