What Happened To Spring? 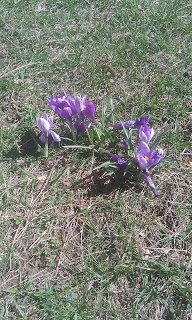 After daytime highs in the low70’s and nighttime lows in the 40’s and 50’s, the weather has turned cold again. Today’s high in New York City was 44°F. Tonight’s low is predicted to drop down to 27°F. Brrrrr!

It was so cold this morning when I walked Myrrhlyn that I had to go to wear a heavy jacket, the first time I have had to do so in over a week. Along with my heavy jacket I also wore gloves this morning, so obviously shorts were not part of the attire.

After posting photos of spring crocus the previous two Fridays I thought I might chronicle these spring flowers over the next several weeks. When I went outside to photograph them on Wednesday, however, I discovered that because of the wind an cold that they had already started to wither and die. The crocuses were croaking! I did not know these little heralds of spring were so fragile and short lived.

This could very well be the last photo of living and dying crocus that I crop for posting to Summit to Shore. The next time I go out to photograph them, they might be a clump of dead blossoms and stems.
Posted by John Edward Harris at 5:30 PM