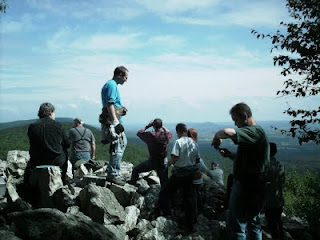 Two out of town weddings in three weeks! At least Chris and Mamta's wedding was closer to home, just west of Allentown, Pennsylvania, not all the way across the Keystone State and into Ohio. Last saturday morning, before the afternoon's outdoor ceremony, I had the opportunity to visit, along with the groom and several other wedding guests, Hawk Mountain Sanctuary, an international center for raptor conservation. Since it seems that I have been writing a lot of “shore” and “religion” posts lately; my visit to Hawk Mountain offers me the opportunity to write a “summit” post.

Hawk Mountain was founded in 1934 but I first heard about it around ten years ago from Elaine, the mother of a young man, Doug, which either worked or volunteered there, I now do not remember which. I later heard more about Hawk Mountain and the annual migration count from Doug himself. Ever since then 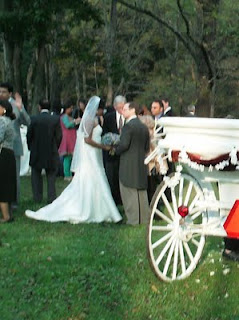 I have longed to visit Hawk Mountain. Last Saturday, thanks to Mamta, Chris and their wedding, my longing was fulfilled.

The Sanctuary was only a few miles from the site of the wedding. Saturday morning several people associated with the wedding boarded a school bus which took us to the site. Once there we hiked the well maintained Lookout Trail first to the South Lookout and then to the North Lookout. The top photo was taken of wedding party (that is groom Chris, standing highest) and other visitors standing atop the North Lookout.

I had not been in the preserve long before it reminded me of what I call a “Western Pennsylvania Wilderness Fragrance” even though we were in eastern, not western Pennsylvania. The aroma is probably an alchemical combination of mountain laurel, cool conglomerate quartzite rock, damp earth, and various decaying organic matter warmed by the sun. If that scent could be bottled I would buy it! It took me back decades to numerous hikes and other wilderness outings in Pennsylvania’s Laurel Highlands and along the Highland’s Chestnut Ridge.

In addition to the familiar smell I saw lots and lots of mountain laurel, the state flower of Pennsylvania. I also saw, and tasted, teaberry, for the first time in nearly a year. I felt rock under my feet and sun on my face. While I did not see many raptors I still enjoyed the view and the brief time we could spend at Hawk Mountain. I wish we could have stayed longer, but alas, there was a wedding waiting. The bottom photo to the right is of Mamta and Chris, and other wedding guests, at the post wedding reception.
Posted by John Edward Harris at 6:18 PM