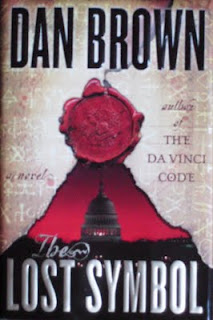 As I read these 505 pages I was aware that I was reading the third installment in a Robert Langdon series as there were references to the events recounted in Angels and Demons as well as The DaVinci Code, but not so many that one needs to read the previous novels first. It also seemed that Dan Brown assumed this novel would be turned into a movie as some of its chapters seemed to be written for the big screen as much as for the mind’s eye.

Although Robert Langdon is the only recurring character, there are numerous recurring plot devices as well as twists and turns reminiscent of the previous two novels. When I read The DaVinci Code I found Brown’s writing fresh and exciting. Not this time.

Having lived near our Nation's Capitol, close enough to make it downtown to the Mall within 90 minutes, my interest perked when I reached Chapter 79 on page 295 as Robert Langdon and the reader arrived at one of my favorite DC landmarks, one I have visited numerous times, exploring most of its public space. I was disappointed more of the novel was not set there. My hunch is that tourism to DC might slightly increase as a result of this novel being published.

As the plot line progressed, forty to fifty pages before the end I could see where it was headed. Being a theologically educated Christian with a strong background in classical and medieval Philosophy, and having read a lot of esoteric literature, I was familiar with most of the symbolism and theories that Brown employed. I was therefore not surprised by the end and was even a little disappointed.
Posted by John Edward Harris at 9:16 AM

Did you read Maureen Dowd's review in the Times? It was priceless.

I have not read Maureen Dowd's review. I will go searching for it.

Comnpared to Dowd, I think I was less critical and more kind. For others who want to read Dowd's review for herself, here is the link.
http://www.nytimes.com/2009/10/11/books/review/Dowd-t.html?scp=1&sq=dowd%20symbol&st=cse