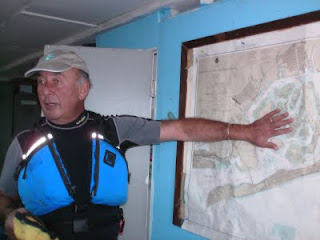 On Monday, October 12, 2009, around 11:15 AM, after more than an hour’s planning, preparation and outfitting, eighteen courageous paddlers embarked not in three large galleons but in eighteen small boats from the dock of the Sebago Canoe Club in Brooklyn, New York on an epic voyage of discovery. Led by Anthony “Tony” Pignatello (photo top right), the Corps of Discovery kayaked southward through Paerdegat Basin, under the Belt Parkway, and into the open and treacherous waters of Jamaica Bay, where the water temperature was 60 and the air temperature was 54. An hour later, after an uneventful crossing of the open bay, they landed on an island called by 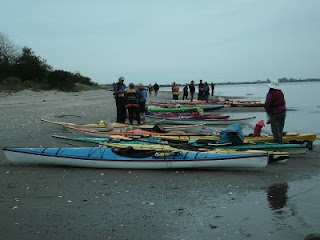 Had the historic Sebago Flag not been inadvertently left behind in the clubhouse, the explorers would have planted it in Canarsie Pol’s sandy soil, claiming the island for the Sebago Canoe Club.

As it was, these hearty men and women of the sea continued their historic trek eastward along the island’s southern shore and shortly after 1:00 PM entered nearby salt marshes in search of the previously elusive “Marsh Passage” (photo bottom right). Having divided the company in half at the southern end of the marshes, two separate scouting parties discovered their separate passages through the watery grasses and reunited at the northern end of the grassy labyrinth. Paddling again as one group, the expedition then kayaked westerly along Canarsie Pol’s northern shore until turning northward for their return trip across the open water 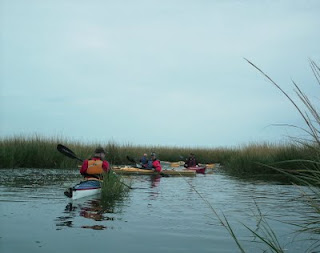 s of Jamaica Bay. Successfully navigating across the bay a second time the troupe headed home, making way once again under the Belt Parkway and northward into Paerdegat Basin until, 6.9 miles and 3 1/2 hours after beginning, they arrived back at the Sebago dock around 2:45 PM.

After carrying their kayaks up to the wash racks, washing and storing all their boats and gear, the tried and tested heroic explorers retired into the club house for a feast worthy of Pilgrims. Sausage and hamburgers were grilled by Fran. Beer and wine was drunk. Many fresh delicacies and baked goods were shared and consumed. A good time was had by all.

Surely this ambitious undertaking by the dozen and half kayakers will be hailed for years to come within the halls of the Sebago Canoe Club clubhouse. Songs will be composed and sung. Poems will be written and recited. Statues will be erected. Blogs will be written. Ken Burns will document. Holidays will be named and observed in their honor.

View more photos of this epic adventure here.
Posted by John Edward Harris at 8:31 AM