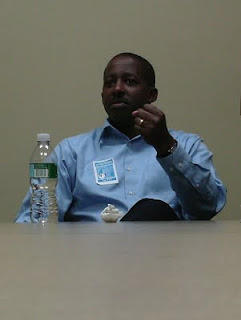 Earlier today I enjoyed an intimate lunch and conversation with The Reverend Byron Wade (photo top right), Vice Moderator of the 218th General Assembly of the Presbyterian Church (U.S.A.). So did fourteen other members of New York City Presbytery, including five staff of New York City Presbytery, at least one Clerk of Session, one Candidate Under Care, and several Pastors. Bryon was on the second day of a ten day Vice Moderator’s visit through the Northeast. The day before he had visited in Long Island Presbytery. Later in the evening he was to visit Hudson River Presbytery, and the day after Newark Presbytery. He plans to conclude his visit on Saturday, October 17, when he visits the meeting of the Synod of the North East as it meets at Stony Point Conference Center.

I have attended as an observer a lot of General Assemblies, including the 218th. I have also known some former moderators, but only after they served as moderator. I think this was my first opportunity, in over twenty years of ministry, to enjoy a somewhat intimate meal and conversation with a sitting Vice Moderator or Moderator.

During our conversation I learned that Byron’s former Pastor was the Reverend Isaiah Jones, now a member of the Church Triumphant. I am particularly fond of Isaiah’s hymn Fill My Cup, #350 in the Presbyterian Hymnal and even have a recording of it that Isaiah sent to me. Learning that Isaiah was Bryon’s Pastor means that in my mind Bryon’s stock just went up.

I also learned that Bryon has several New York City connections, including a family member who served as Executive Presbyter, and a former Pastor of the church Byron now serves who is currently serving as Acting Executive Presbyter. 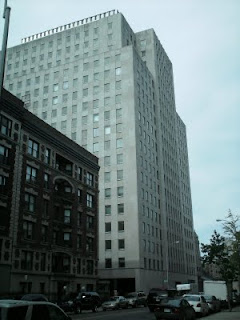 Byron openly compared himself to his good friend and General Assembly Moderator Bruce Reyes-Chow. Byron considers Bruce a “Type A” personality while he sees himself as more laid back. He also considers that compared to Bruce, who is generally progressive, that he is more moderate. I also learned that traditionally the Moderator visits 2/3 of the time and the Vice Moderator visits 1/3 of the time but that Bruce and Byron have agreed to each visit half of the time.

On a side, I noted that of the fifteen members of New York City Presbytery gathered in Cafeteria Room 2 of the God Box that eight were racial ethnic and seven were Anglo, a fair representation of the Presbytery as a whole. Unfortunately there were very few present under the age of forty, maybe only two.

For those wondering what in the world I mean by “The God Box” I mean the building at 475 Riverside Drive in the New York City (photo bottom right). For decades prior to the mid 1980’s the building housed the national offices of the United Presbyterian Church (U.S.A.) and still houses the offices of the National Council of Churches as well as national and regional offices of numerous other denominations and church related entities, including the offices of New York City Presbytery. The building offers little if any outside unique architectural qualities and more or less resembles a box, thus the moniker.
Posted by John Edward Harris at 4:44 PM

John -- thanks for a great summary of what was a good meeting. Just to clarify, I think there were three of us under 40 - probably a higher percentage than with most PNYC gatherings :-)

Three under 40? You? A candidate? And the third?