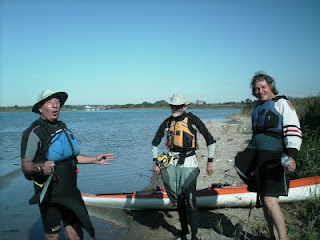 For the second Tuesday in a row I climbed out of bed earlier than usual in order to go kayaking. Joined by Tony, John W. and Michael (both photos to the right), three of the same four paddlers as last week, we had all arrived at the Sebago Canoe Club by 7:30 AM and we were on the water by 8:15 AM

Last week we paddled west. This week we paddled east, paddling into and exploring Spring Creek and Hendricks Creek. Last season I had explored Spring Creek, more or less a small meandering wilderness oasis populated with various water fowl in spite of flowing under the Belt Parkway. This was my first time in Hendricks Creek, a more urban experience bordered with parkland on the east but a modern sewage treatment plant on the west.

Unlike last week there was little wind and the bay was fairly smooth. Tha 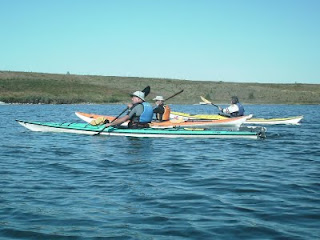 nks to easily paddling we averaged 3 mph over the 11.8 mile trip, counting a 40 minute break, but easily paddled between 4 to 5 mph when we were actually paddling. Had we stayed in open waters rather than paddling into the creeks our average speed probably would have been 4 mph. The air temperature was 68 by noon and the water temperature was around 62. Thanks to the sun and light wind I was comfortable in chaco's, water shorts, and a long sleeved synthetic shirt under a paddling jacket, but I have a hunch that on my next paddle I will be wearing a wet suit with neoprene booties.

I paddled the club’s blue Impex Montauk. I vaguely remember paddling it before but am not sure when. I found its cockpit smaller than that of the old Wilderness Systems Sealution which I paddled last week but after a few minutes felt very comfortable in it. At 5 feet 8 inches however, I had the foot pegs fully extended, so this would not be a good boat for larger or taller paddlers.

More photos from the trip have been posted on picassa.
Posted by John Edward Harris at 10:31 AM