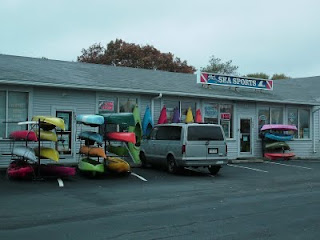 I am not prone to hyperbole, so when I say that Cape Cod Sea Sports (photo top right) is one of the most awesome kayak shops I have visited, I mean it. The only problem is that owner Jeff Craddock (photo bottom right) bills his family business not as a kayak shop but as a full-service water sports facility. I guess he is right because the shop caters to scuba and snorkeling as well as kayak fishing.

The business was started by Jeff’s dad sixteen years ago in 1993 but Jeff now owns and manages it. While Jeff offers full service, he also offers personalized service, and he knows the sport. Admittedly, when Vicki and I visited his shop we were the only customers on a cold, rainy Wednesday afternoon, so there was no one else for Jeff to service. Our visit probably helped him avoid boredom.

Here is how we ended up at Cape Cod Sea Sports. 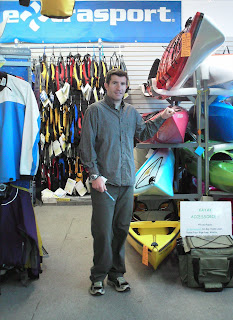 Vicki and I, along with our dog Myrrhlyn, were driving back from a short stay on Cape Cod. We had gotten off Route 6 for lunch and were headed back to the main road when I saw brightly colored kayaks off to my left. I made a quick left turn into the parking lot of Cape Cod Sea Sports. We spent some time outside looking at the kayaks before we ever entered the store. Inside we were greeted by a great assortment of paddling accessories as well as scuba and snorkeling gear and kayak fishing gear. We were already glad we had turned off the road and come into the shop before I saw a sign that said something like “visit our kayak warehouse downstairs”. Not seeing any stairs I asked Jeff if the kayak warehouse was open. He said it was, flipped up a plywood floor covering the stairs, turned on the lights, and escorted us down the steps to the largest selection of kayaks and canoes I have ever seen perhaps with the exception of the Jersey Paddler. These boats, however, were out of the weather and out of the sun!

In the full basement below the shop we saw canoes and kayaks, both sit on tops and sit in, recreational and touring, of every shape and size from numerous manufactures. When I turned the corner and saw a composite Necky Chatham 17 with a great SALE price I immediately fell in love. My hopes were dashed when Jeff told me that he had sold it just the night before. Vicki’s paddling heart was strongly moved by the Necky Eliza. While it was for sale, it was not ON SALE. Maybe another day.

When I questioned Jeff about his inventory he explained that what we were looking at would probably last through spring. He expected to move the inventory three times over before the next summer paddling season was over.

In addition to their support of kayaking I am interested in Sea Sports support of snorkeling. I have snorkeled in the Bahamas and a little around the Outer Banks but never as far north as Cape Cod. When I asked Jeff about the snorkeling trips he explained that they cost about $35 and include a naturalist guide. All the trips so far have been from the beach but he is considering trips using kayaks (sit-on-tops I assume) as snorkeling platforms. I like that idea.

It had been about twenty-five years or more since Vicki and I were last on the Cape. This was our first trip since we started kayaking almost ten years ago so we saw the Cape through new eyes, the eyes of kayakers, and we like what we saw. I imagine we will be making a few more trips up to the Cape not only to kayak but also to snorkel.

If you are ever on the Cape Cod and anywhere near the village of Hyannis in the town of Barnstable, be shore to visit Cape Cod Sea Sports, 195 Ridgewood Ave. Until then, visit Jeff’s blog.
Posted by John Edward Harris at 8:47 AM

"Why, does it Doolittle?"