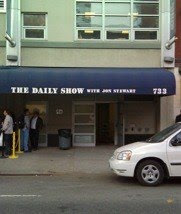 When tickets for a taping of The Daily Show with Jon Stewart are secured months in advance, fans have no idea who the guest or guests for their particular show might be. Imagine our delight when we learned, just a day in advance, that Rachel Maddow was to be Jon’s guest the evening of the show we had tickets to, last night’s show.
Most evening’s at 9:00 PM we watch the Rachel Maddow show on MSNBC. I prefer Rachel’s show over both Hardball with Chris Matthews and Countdown with Keith Olbermann. Rachel is less acerbic and wittier than both Chris and Keith. She is also more playful but can be deadpan series when she wants to.
At 11:00 PM we usually watch the Daily Show with John Stewart on Comedy Central. His sarcastic commentary on the day’s news, especially his relentless exposé of the double standards of conservative politicians and Fox commentators are always informative as well as entertaining.
Most of Jon’s interview of Rachel last night was devoted to her upcoming MSNBC two hour documentary about The McVeigh Tapes (Monday at 9:00 PM on MSNBC). During the interview she said she thought McVeigh was a sociopath and that she had no compulsion against him receiving the death penalty. Without much of a segue she even opined that she could kill Osama Bin Laden with a spoon if she had a chance. Yes, with a spoon. Who needs weapons of mass destruction when all Rachel needs to end Al-Queda terrorism is a spoon?

Rachel noted that she upholds two commandments: Don’t lie and don’t kill people. I can live with that. Truly, I can.
Last night was the second time we have attended a taping of the Daily Show with John Stewart. You can read about our first time in the audience here. 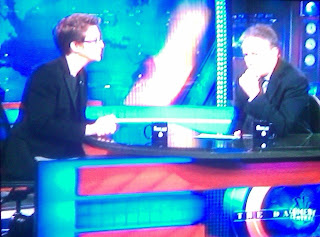 Last night we thought we had great seats when we were placed in the front row, only to discover during taping that there were many times we could not see Jon because one of the cameras was between us and him. Before taping was completed Jon announced that he needed to re-record a couple of his comments accompanying the video segments. Since only the sound was being recorded and not video, both Jon and the staff were more relaxed for these few minutes than they had been for the rest of the show.
Taping was over and the audience release around 7:00 PM. We were back home in time to catch the 11:00 PM Broadcast (photo of TV screen bottom right). We even arrived back home in time to see the last few minutes of Rachel Maddow Show.
Posted by John Edward Harris at 9:39 AM