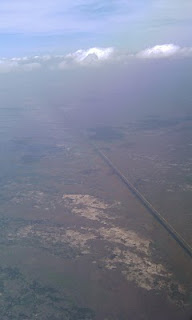 When recently returning by plane from Tampa to New York via Miami, as we approached Miami we flew over the Everglades. If it were not for mid afternoon sunlight reflecting off the water I would have found it difficult to distinguish water from marsh and ground. The occasional canals, perhaps some natural and some dredged, could have led me to think I was above a Martian plain. The predominance of browns rather than greens and blues added to the illusion.

I almost slept through the experience and awoke just minutes before the view transitioned to roads, highways and developments. The next time I experience the evergalds I hope it is from the cockpit of a kayak rather than the cabin of a commercial jetliner.
Posted by John Edward Harris at 10:07 AM