Welcome to My Neighborhood: Polish Flags Are Flying 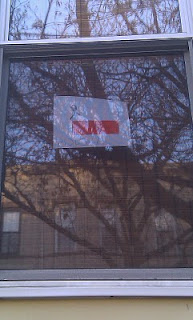 As thousands of Poles gather in Warsaw to mourn the 96 victims of last week’s plane crash in Russia, Polish flags, some bearing black ribbons, have been unfurled around my neighborhood of Ridgewood, Queens, New York City. 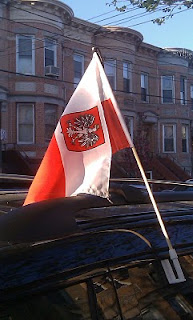 Many years ago Ridgewood was predominately a neighborhood of German immigrants. It now appears pretty eclectic but with a heavy eastern European contingent, including a fair number of Poles.
There were not very many Polish flags in sight around the neighborhood a day or two after last week’s plane crash which claimed the life of Poland’s President and so many other Polish leaders. One by one, however, Polish flags, small and large, professionally crafted and drwan on paper with crayon and marker, started appearing in windows, hanging from windows, on cars, and hanging from staff’s tied to railings. Some of them have black ribbons of mourning tied to a grommet or to the top of a staff. 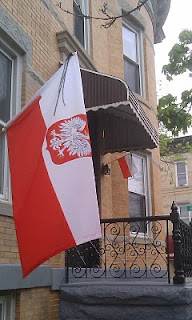 As a native West Virginian I resonated with last week’s mine disaster in West Virginia which claimed the lives of 29 miners. As much empathy as I feel for fellow Mountaineers who have lost family, friends and neighbors in that accident, I can barely imagine what Poles and Polish-Americans living here in Ridgewood must be feeling after losing not only a beloved President but many of their home nation’s Government, Military, Business and Church leaders. 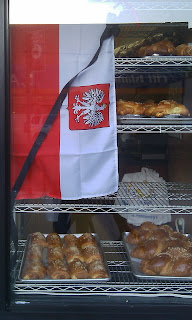 Regardless of how you feel or think of President Obama, imagine Air Force One crashing not only with a beloved President aboard, but with Nancy Pelosi, Harry Reid, Mitch McConnell, and Mike Pence onboard; with Robert Gates, General Mike Mullen, and General David H. Petraeus on board; with Bill Gates, Donald Trump, Oprah
Winfrey, and T. Boone Pickens on board; with the Reverend Dr Sharon Watkins, the Reverend Michael Livingston, the Reverend Dr Michael Kinnamon, and Most Reverend timothy M. Dolan aboard; and with over eighty other national leaders on board.
Such a loss of national talent and knowledge, not to mention the loss of life, would be devastating blow to our national energy, casting a temporary pall over our nation. I can only imagine that this is the reality being faced by Poland, a nation in mourning for some of its brightest and best. Like a phenix rising from the ashes, may the crowned white Eagle of Poland once again soar as the nation overcomes this tragedy.
Posted by John Edward Harris at 8:55 AM

Email ThisBlogThis!Share to TwitterShare to FacebookShare to Pinterest
Labels: Poland, Polish PlaneCrash, Welcome to My Neighborhood