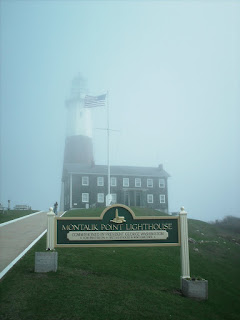 With welcomed warmer temperatures and sunshine following a cold rainy spell, what else is a New Yorker to do on the Saturday before Easter but drive 120 miles due east to Montauk? Located at the far eastern tip of long Island, there is no place in all of New York State that is farther east.

In spite of the warm and sunny conditions in Queens the late in the morning, by the time we parked near the historic Montauk lighthouse (photo right) later in the afternoon, we found ourselves in the midst of a chilling fog, thick enough for the fog warning horn at the light house to be sounding the entire time we were there.

After the two and a half hour drive out to Montauk I was not about to allow the $9 visitor fee to prevent me from walking to the top of the historic Montauk Lighthouse, now the first lighthouse I have ever climbed to the top of. Yes, I think the $9 fee was worth it. Not only was the light house museum, which the fee helps support, entertaining and informative, it was of professional caliber, not your usual fly-by-night tourist schmaltz. The fog enshrouding the lighthouse prevented any sort of view but was still well worth the climb. Stepping out from the heated upper chamber out into the fog and chilling breeze was itself worth the climb.

There are numerous historical connections that make a trip to Montauk an historical bonanza. The slave ship La Amistad ran aground on nearby Block Island. Theodore Roosevelt and other Rough Riders recuperated there after the Spanish American War. Native Americans once inhabited the land.
Posted by John Edward Harris at 9:43 PM