Have You Returned Your Census Form? 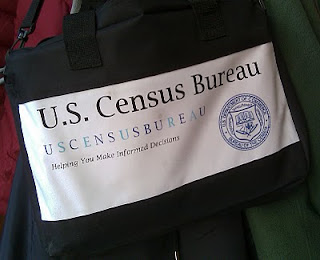 For the 23rd time in an unbroken chain dating back to 1790, the United States is in the midst of the decennial census. Every housing unit should have received a questionnaire that was to have been filled out by one of the residents and mailed back to the Census Office in a prepaid return envelope. Housing units that for which no completed census form was received are just now starting to be visited by census workers known as NRFU (Nonresponse Followup) Enumerators, probably wearing a shoulder bag similar to the one in the photograph. Enumerators must wear an identification card hanging from a lanyard around their neck but the card does not bear their photograph.

If an Enumerator rings your doorbell or knocks on your door, please take about ten minutes to accurately answer the questions he or she will ask. If an Enumerator visits while no one is home and leaves a Notice of Visit with their phone number, call them back to schedule an interview. They may be able to conduct their interview over the phone rather than visiting you.

All Census data is confidential and Enumerators have sworn an oath to protect your personally identifiable information. If an Enumerator breaks confidentiality they may face a fine as well as imprisonment.

An accurate census count is essential not only for determining the number of Representatives a state will be entitled to send to the United States House of Representatives but how Congressional Districts within a state are structured. Even in a state that neither gains nor losses representation due to this census, the Congressional Districts within the state might be re-aligned so that the population within each of the districts is as nearly equal as possible. While a state’s total population might not have changed much since the 2000 Census, the population within a state might have shifted from communities near summits to communities near shores (yes, that was a self serving reference to this blog) or vice versa, necessitating the congressional districts to be redrawn.

The decennial census not only tells us how many people live where but how they live and what race they are. Like a snap shot of America taken every ten years, the Census documents not only who we are as a country but who we have been and how we are changing. So if an Enumerator visits, patiently and accurately answer the questions and smile.
Posted by John Edward Harris at 9:10 AM

Email ThisBlogThis!Share to TwitterShare to FacebookShare to Pinterest
Labels: NRFU Enumerator, US Census