Presbyterian Voices for Justice is Born

We have a new name!
We are delighted to announce the new name of the merged organization of Witherspoon Society and Voices of Sophia: Presbyterian Voices for Justice. We offer our thanks and congratulations to Anne Barstow for offering the winning entry in our contest to find a new name -- and our thanks to all the others who have offered very good ideas as well.

We believe it is clear about who we are as a merged organization, maintaining both the “Voices” aspect of the former Voices of Sophia and the broad-reaching “Justice” concerns of the former Witherspoon Society. And it makes clear that we are Presbyterian in membership and outlook. Also, it has a short and easy acronym! We look forward to continuing our discernment of God’s “voice” for justice in church and society. 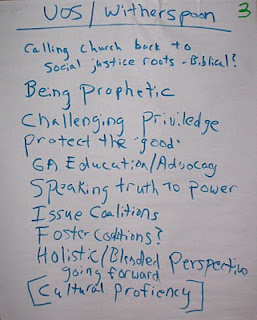 The union of these two progressive grass root Presbyterian voluntary associations has been in the making since the 218th General Assembly (2008) of the Presbyterian Church (U.S.A.) in San Jose when it was first publicly announced that the two organizations would be merging. The Boards of the two groups met in a combined meeting last May in Minneapolis to begin massaging the union. The photo of notes on newsprint, to the right, is a small sample of their joint work.

I have thought of the Witherspoon Society as a gadfly, calling the PC(USA) and its leaders to account when they back away from the Social Gospel. With a small but passionate membership, the Witherspoon Society has provided theological reflection and community organization for many progressive causes, sometimes acting as a mediator or peacemaker among other progressive organizations whose more focused agendas sometimes find their strategies conflicting.

According to a post on the Voices of Sophia blog, “VOS was organized in 1995 in response to the backlash against the 1993 feminist theological event known as “Re-Imagining.” It was felt by many who were active in the PCUSA at the time that those who advocated feminist values, particularly women staff, were under siege and needed a critical mass of support outside the structures of the church.” Voices of Sophia was intended to be that critical mass and ever since has been “a community of women and men in the larger community of the Presbyterian Church (USA) being reformed by God through the Spirit of the living Christ, and working toward the transformation of the church into a discipleship of equals.”

If both former organizations bring their strengths to this union, progressive peace loving, justice minded, creation affirming, feminist, proponents of the full inclusion of LGBT Presbyterians will have the opportunity of associating with a group that is neither single issue focused or dominated by Pastors of tall steeple large churches. On the other hand, if both partners to this union contribute their weaknesses it will be only a matter of time before its combined membership dwindles and the organization becomes irrelevant. I hope and pray for the former.

Disclaimer: My wife has been a member of Voices of Sophia and both she and I have been members of the Witherspoon Society, both of us having served at separate times on Board of the Society. The opinions expressed above, however, are my own and do not necessarily reflect or represent the views and opinions of the former Witherspoon Society, Voices of Sophia, or the current Presbyterian Voices for Justice or any other former or current Board Members of the previous or current organizations. Anne Barstow, who suggested name was selected from numerous entrys as the best, is a member of the Rutgers Presbyterian Church in New York City and was a member of the New York City Commission which installed me as Designated Pastor of North Church Queens.
Posted by John Edward Harris at 8:19 AM

As long as they still have the Witherspoon Dance at GA....