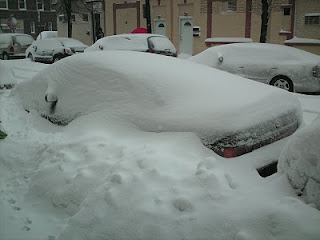 This is only the third winter I have lived in New York City and it is without a doubt the snowiest. Even before this most recent storm dumped a foot of snow on us I asked an older lifelong New Yorker what he thought about this winter, how it compared to previous winters. He said we have received more snow this season than we have received in many years and he had to reach all the way back to his childhood memories to recall a winter with this much snow.

Yesterday the temperature was slightly above freezing and the snow, often falling as down like flakes, was very wet and quickly turned to slush after it fell. Three or four times I shoveled what looked and felt like a giant 7-Eleven Slurpee. Overnight the temperature dropped below freezing, the snow changed consistency, and this morning I woke up to about ten inches of snow on top of an inch or two of slush, with some drifts nearly up to my knees. The gusty winds forced me to squint as Myrrhlyn and I made our morning rounds.

As we circumnavigated the block we saw buried cars (photo top right), local residents cleaning snow off their cars and in some cases digging their cars our from snow drifts or after having been plowed in. Many of the cars already on the road, unable to handle the slush on the streets, were slipping and sliding, unable to gain good traction. I even saw a NYPD Patrol Car, emergency lights flashing, driving by at about 10 mph. I am certain response times are up this morning.

One sight that surprised me my first winter here but that I am now growing accustomed with is seeing pedestrians walking through a snow storm holding an open umbrella over their head. It seems to make sense when the snow is really wet, but when the snow is cold, well, I just don’t get it. 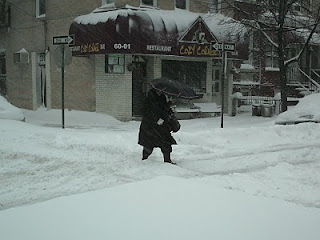 I saw one umbrella yielding pedestrian walking through the middle of the intersection of 70th Ave. and 60th St. in Ridgewood (photo to the right, second from top) probably because she thought the slush on the streets, an inch or two deep, would be easier to negotiate than the eight to ten inches on most sidewalks. I think she was right.

We are predicted to receive another 3-5 inches of snow today, another 1-2 inches of wet snow tonight, and up to an inch of slush tomorrow before the storm winds down and moves out of the area. At least we have power and can easily walk to a store.

I have posted some of this morning’s photos on Picasa so that you can see for yourself what a snow storm looks like in an urban environment.
Posted by John Edward Harris at 9:33 AM