Another NOLS Night Out 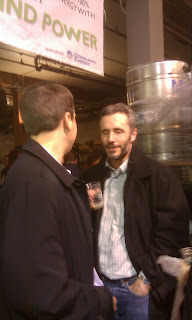 Over a dozen alumni of the National Outdoor Leadership School, spouses, friends and at least one canine companion gathered at the Brooklyn Brewery last night for a bimonthly social. In addition to enjoying conversation with my NOLS friends I enjoyed the Brown Ale while my wife Vicki enjoyed the Pilsner. I think Michael enjoyed several of BB’s offerings. Gint stuck to his Lenten discipline, having given up alcohol. Karen provided a bag of munchies. Gint and Toby can be seen enjoying conversation in the photo to the right. 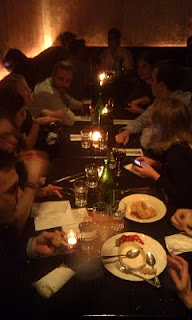 The Brewery was pretty crowded and so we never were able to claim our own NOLS table and had to stand. The crowd also raised the volume level, making it hard to hear the conversation unless you were six inches to a foot away from the person you were talking with.
Afterward some of us trekked south to the Relish Restaurant for dinner, dessert, and more conversation in a quieter setting where tables and chairs were available. Low light levels at both locations limited photo-ops, nevertheless, some NOLS Alumni can be seen at table in the photo to the left.
For the record, a trail map was unfolded at the Brewery and a trails guidebook was seen on the table at the Relish. Trips past and present were discussed,as well as an upcoming service project. The NOLS tradition thus continues.
If any NOLS alums in New York City have not yet discovered it, there is a NOLS Alumni – New York City Group page on Facebook. More photos can be seen at my Picassa page.
Posted by John Edward Harris at 9:51 AM