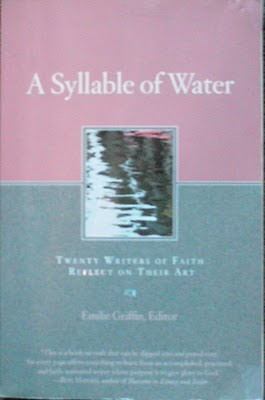 As I have noted before, I have been searching for a retreat center in the midst of New York City and have not yet found one. Awhile back, however, I stopped in the Central Park le Pain Quotidien at the corner of 7th Avenue and 58th Street. I was looking for a light meal before a concert at Carnegie Hall and le Pain Quotidien, one of my favorite restaurant chains, was nearby. It had been awhile, however, since I had last eaten at one.

This particular evening, as I sat alone at the simple wooden table, the tomato soup with a side of organic bread, glass of the Red Cabernet/Syrah RN 13, and Organic Rooibos Chai Tea took on a sacramental quality. No doubt the catalyst for this nearly sacred moment was reading silently, while I waited and ate, A Syllable of Water, a collection of twenty writers of faith reflecting on the art of writing and another step on my journey of exploring the craft of writing. As I read I wondered if I was one—not one of the twenty—but rather a writer of faith.

The unexpected moment became a micro-retreat. Though I was surrounded by conversing patrons, spoons clinking against bowls, kitchen noises filtering into the dining area, and the sound of sirens blaring outside, I was alone with my thoughts as I reflected on the written word.

During this unexpected and unplanned micro-retreat I consumed two chapters, Jeanne Murray Walkers' “Steep and Exhilarating Mountains of Playwriting (On Drama)” and Scott Cairns' “A Troubled and Troubling Mirror (On Poetry)”. I have since finished this wonderful little paperback and recommend it for anyone desiring to imbibe a written word from a spiritual perspective. I also recommend the cuisine at le Pain Quotidien and give thanks for a few unexpected moments of retreat.
Posted by John Edward Harris at 8:48 AM