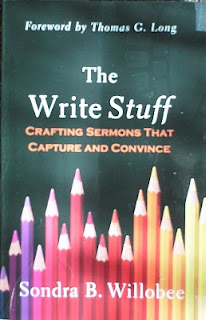 Sondra B. Willobee’s The Write Stuff: Crafting Sermons That Capture and Convince could perhaps transform the way I approach sermons and preaching. I used to view preparing a sermon manuscript as a chore which precedes preaching. Writing a sermon was a burden, something I did in an attempt to invite the Holy Spirit to inspire me when it wanted to rather than confining its work to a fifteen minute window on Sunday morning. Sermon writing was a feeble attempt to organize my thoughts and find the right word or turn of a phrase in order to better inspire, inform, or motivate. Thanks to Willobee I am now beginning to think of preaching as the natural extension of writing sermons, and sermon writing as a spiritual discipline as well as an art form and something I actually enjoy.

For some yet undiscovered reason I have recently become more interested in the craft of writing and am even beginning to think of myself as a writer — not necessarily a good writer — but a writer nevertheless, and a writer of more than just sermons. This is surprising since I have often been challenged by spelling and grammar and am not the world’s best proofreader. I sometimes half jokingly, half seriously, say that I am a preacher because no one knows how I am spelling the words I use in the sermons I preach.

My average sermon contains about eighteen hundred words. Over the past twenty-four years I have written or revised nearly two million words intended to be preached. In the past year I have written over forty thousand words in my journal. I have not yet calculated how many words I have posted to this blog since I started writing for it a little over a year ago. Perhaps I have been a writer for some time and I did not realize it.

My recent journey exploring the craft of writing began the day I walked into a Theological Seminary’s bookstore and chanced upon William Zinsser’s On Writing Well. A Syllable of Water: Twenty Writers of Faith Reflect on their Art, which I in part imbibed in one of my favorite New York City restaurants in what turned out to be a micro-retreat, became my next waypoint along this text trek. Sondra B. Willobee’s The Write Stuff, which I discovered thanks to various catalogs and reviews, is now the third stop along my pilgrimage.

Willobee’s title, alluding to Thomas Wolfe’s bestselling novel and award winning film by the same name, was the hook that caught my attention. The cover graphic, seventeen sharpened colored pencils of varying heights lined up in a row, not unlike seven Mercury astronauts lined up for a photo op, and a forward by one of my former Professors, Thomas G. Long, was enough to get me to bite.

Many of Willobee’s suggestions and exercises are not new. Much of what I read in the Write Stuff echoed Zinsser’s On Writing Well, which I point out as a compliment and not a criticism, but Willobee goes the extra step of applying time tested ideas and concepts from the craft of writing to the crafting of sermons. Willobee’s book is thus one I will need to go back to and live with for awhile, as it is not the sort of book I can read once never to return to.
Posted by John Edward Harris at 10:50 AM