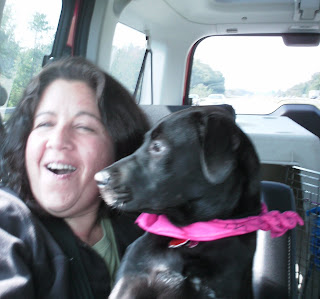 For only the first or second time since my first blog post on January 5, 2009, I have gone a week without posting anything. The reason is that I have been on vacation, a vacation that included a road trip (this post) and two days of continuing education (future post).

A week ago Vicki and I packed up the car and, with Myrrhlyn in a travel kennel in the car, headed out of the city. We were destined for central Ohio where Vicki was to co-officiate at a wedding for a couple of our former students.

It was Myrrhlyn’s first road trip. He was a great traveler, throwing up only once! He seemed not to mind riding in his travel kennel and was occasionally invited out of the kennel to sit on the lap of the person in the passenger seat (photo top right).

I had forgotten that Pennsylvania is over three hundred miles from east to west, that is if one drives on Interstate 80. I-80 has at least one redeeming attribute. It is not the Pennsylvania Turnpike. 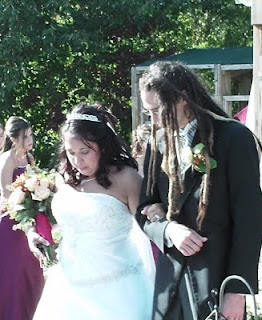 Nine hours and five hundred miles later we pulled into Loudonville, Ohio, population slightly over 3,000 and our home for the next two days. Loudonville impressed me as a quintessential American small town with a slight artsy-crafty flavor. Too many closed business and boarded up buildings, however, betrayed the current recession and the fiscal plight of small town America. Loudonville, located near the Mohican River, also happens to be the canoe capital of Ohio, and it was frustrating to be there without our kayaks or the time to enjoy the river.

Bride Megan and Groom Eric (photo middle right) are both recent graduates of Davis and Elkins College, where Vicki served as Chaplain for ten years and I taught religion and philosophy as adjunct faculty her last five years at D&E. Attending Eric’s and Meghan’s wedding was like attending a small college reunion not of classmates but former students. At least four of my former students were in attendance. Even more former students Vicki knew were in attendance.

Vicki co-officiated with Chris, Meghan’s Presbyterian Pastor since the day he baptized her as an infant. The bride’s father is, by the way, the Clerk of Session of Meghan’s home Church where Chris is still Pastor. Eric and his family are also Presbyterian. 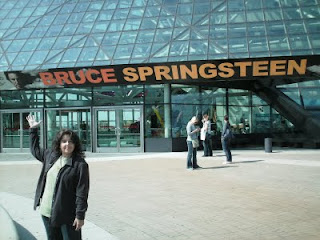 Unfortunately, driving home across Pennsylvania took just as long driving west to east as it did east to west. The Keystone State had not shrunk any during the two days we were in Ohio.

So, the above is partly while I have been silent for nearly a week. The other reason, two days of continuing education, will the subject of a future post.
Posted by John Edward Harris at 10:19 PM

Thanks for coming :) It was great to see you again. You'll have to visit our canoe capital again with your kayaks ;-)

I'm planning a trip out to western PA to see TQ in October. Looking through the Greyhound schedule, once again I'm struck by, yes, how really ridiculously long PA is from east to west.