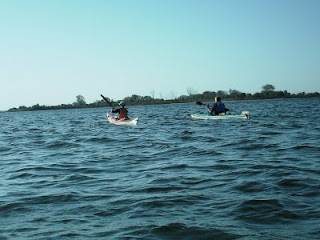 I climbed out of bed an hour earlier than usual this morning so that I could go kayaking. I was out of the house around 7 AM and at the Sebago Canoe Club by 7:30 Thirty-five minutes later I and four others, John, Michael, Tony and Michael, were in our boats and on the water. I paddled an old red Wilderness Systems Sealution which belongs to the club and which I had paddled before. It was my first paddle in nearly a month and one of the earliest morning paddles I have been on.

Starting our under a crystal clear deep blue sky with bright morning sun (photo top right), and water and air temperature both around 66, we easily paddled out of Paerdegat Basin and into Jamaica Bay in spite of some wind. Our first stop was Floyd Bennet Field, where we took a short stretching break. From there we headed for the Marine Parkway Bridge, paddling into a head wind as soon as we rounded the point between Floyd Bennet and the B 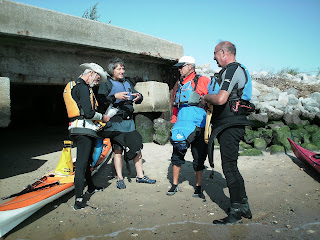 ridge. Just before the beach we stopped for a “wind break” by beaching just downwind of the ramp (photo bottom right).

In spite of the wind, with sunny skies and seasonable air and water temperature, some of us were willing to push the boundaries a little and continue on. While Michael stayed behind to wait for us, the rest of us paddled back out into the wind, under and just beyond the bridge, before heading back to our “wind break” to pick up Michael. Conditions around the bridge consisted of one foot swells and foot and half waves. Paddling under the bridge proper was like paddling through a wind tunnel. It was the most wind the steadiest waves some of us had encountered in quite awhile and shortly after the bridge turned around and headed home. While no one lost it in the wind and waves, all of us were experiencing some weather cocking almost the entire trip.

There was awhile around the bridge when I found myself in that zone where mind, body and spirit seem to be one. There was nothing but me, the kayak, the water, the wind, the waves, the swell and my paddling. It was one of those rare, magical, mystical moments that made getting out of bed and climbing into a kayak worthwhile.

On the way back to Sebago we stopped again at Floyd Bennet Field for a break and were back at the Sebago dock by 12:15 PM. We covered 9.2 miles and averaged two miles per hours including breaks.

Photos from the trip can be viewed on my Picasa site.
Posted by John Edward Harris at 8:19 PM