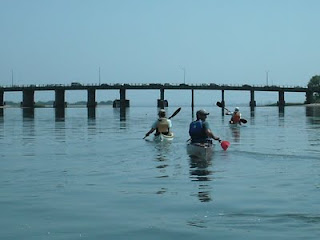 The Sebago Canoe Club Sea Kayaking Committee schedules various types of trips throughout the season. Among these trips are long distance paddles. I am not sure what constitutes a “long distance” paddle. My hunch is anything over 6, 8, or 10 miles. Regardless, I have been on two long distance paddles this season, both of them led by Bonnie. My first long distance paddle was August 2 and the most recent was this past Sunday, August 30.

Last Sunday afternoon ten of us left the Sebago dock around 12:45 PM. The trip began smoothley as we paddled from the dock toward the the Belt Parkway Bridge (photo top right) but soon after we passed the bridge we realized that one of us was not wearing a PFD. Most of us confessed that we had at least once forgotten to don this essential piece of safety equipment. Nevertheless Bonnie and the PFD’less paddler headed back to the dock to pick up a PFD while the remaining eight of us paddled on ahead at a slower pace than usual so the Bonnie and the other paddler could catch up with us.

Not far from the seawall near Floyd Bennet Field the slight breeze, current, tide, and boat wakes combined to create some exciting waves and swells. I thought I was going to lose it once or twice but a few braces and hip flicks kept me upright. All eight of us in fact paddled through what was both challenging and fun. I’ll honestly attribute my successful navigation through the chop to 10% skill, 10% experience, and 80% luck. 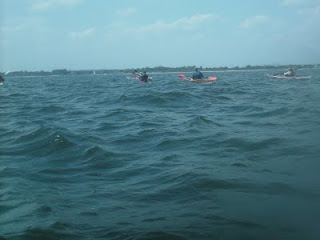 Before we crossed under the Marine Parkway Bridge, Bonnie and co-paddler (now with PFD) had caught up with us but another of our group with a pressing appointment had to head back early, reducing our original ten to nine.

As we entered Dead Horse Bay we encountered some more waves (photo second from top right). One of us capsized (photo third from top right) but assisted by Bonnie’s T-rescue quickly climbed back into the boat and kept paddling. It was the only capsize of the day, though earlier Bonnie had indeed rolled in order to cool off.

We stopped for a short break on an island between Gerritsen Creek and Mill Creek only to have the experience diminished by the sound of motorcycles across the water and jet skies in the water. After a short break we paddled around the island and finally enjoyed some peace and quiet and decided that a Sunday afternoon’s paddle could not get much better. 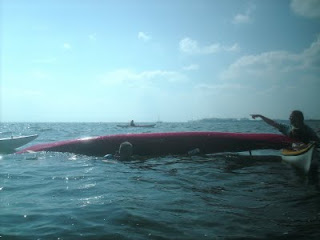 ut fairly calm water around Floyd Bennet Field. The last of our group paddled into the dock around 6:15 PM. I checked my GPS and learned that we had paddled 14.7 miles in 5.5 hours. The distance was my third longest to date, a little shorter than the 15.3 miles of the August 2nd “After the Storm” paddle and a 15.5 mile paddle with Walter and Tony near the end of last season. If nothing else I know that under favorable conditions I can comfortably (with the help of Advil) cover 15 miles in a day. Does that qualify me as a long distance paddler? Compared to some of the people I paddle with and other kayakers I know, I doubt it.

As I already mentioned, this particular long distance paddle was led by Bonnie. Phil assisted. Other paddlers were Tony, Andrew, Dan, Milton, Avi, and two other Johns. I paddled an old Venture Orca for the first time. I liked how the boat handled and it fit well but the deck rigging left a lot to be desired. Andrew and Milton both paddled boats they had built themselves. I had paddled with Bonnie, Phil and one of the other Johns before, but this was my first trip with Tony, Andrew, Avi, Milton and the other John. I hope it will not be my last.

More photos from the trip can be seen at Picassa.
Posted by John Edward Harris at 9:11 AM