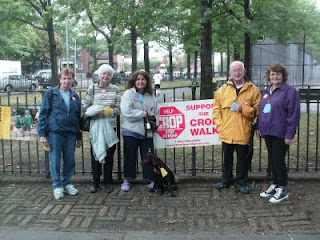 My first CROP Walk was probably 1981. I have walked in CROP Walks in New Jersey, North Carolina, West Virginia and New York to help raise awareness of and funds to combat hunger. For a year or two I was even the Treasurer for the Crop Walk in Gaston County, NC. For the last three years I have walked with my wife and members of her church, the Ridgewood Presbyterian Church (photo left), walking laps around Juniper Valley Park in the New York City Borough of Queens. This was the first year our dog (he is still really a puppy) Myrrhlyn walked in a CROP Walk, however. He even wore a CROP Walk sticker on his rump (bottophoto left). And he raised 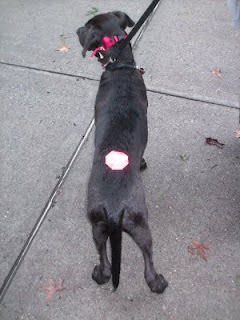 $10! How much money has you dog, or cat, or other pet raised to end hunger?

As we walked around Juniper Valley Park last Saturday in the CROP Walk Myrrhlyn wanted to visit with all the other dogs in the park. Whenever he sniffed other dogs and they sniffed him a conversation would usually arise between us and the humans with the other dogs.

During our first lap around the park Myrrhlyn walked up to a fully grown Black Lab and his human companion. As the two dogs sniffed each other, the gentleman with the Black Lab asked us about the sticker on Myrrhlyn’s rump. We told him about CROP and Church World Service and explained that we were walking to raise money to help fight hunger. The gentleman then reached into his pocket, pulled out his wallet, and gave us two five dollar bills. We were most thankful. Myrrhlyn did not verbally acknowledge the gift but seemed thankful nevertheless.
Posted by John Edward Harris at 9:52 AM