His Head Was Bent in Sorrow, Green Scales Fell Like Rain 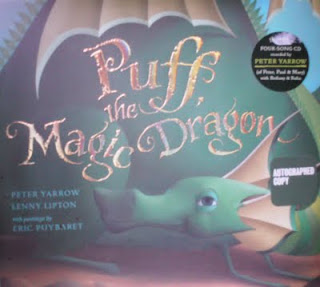 I am not usually one for offering reflections upon the death of public figures, especially entertainers, but I was particularly saddened this morning to learn of the death yesterday of Mary Travers. Even without all my years spent in Church Camping singing folk songs at camp fires where Puff the Magic Dragon was a standby, so much so that I almost became sick and tired of it; the lyrics and tune of Puff the Magic Dragon is indelibly part of my consciousness as one of the first songs I ever fell in love with. I was probably around five or six years old at the time. Later, as I associated that song with Peter, Paul and Mary and my hormones kicked in, I think I fell in love with Mary Travers as well. I cannot think of that song without thinking of her, and I cannot think of her without thinking of that song.

I had the opportunity and pleasure of hearing PP&M live in concert at least once, at the Barnes of Wolf Trap, in the late 90’s. They would start singing and the audience would join in. By the time the end of the song came along PP&M’s voices were drowned out by the crowd. Along with their music they offered political and social commentary that was desperately needed at that time. Their performance, or rather their appearance, was a religious experience, akin to a religious revival, perhaps even a theophany.

Dragons live forever, but not so little boys and girls or folk singers for that matter. The world of music and the world in general was a better place with Mary Travers in it. Puff and I mourn her death.

Here are a couple links, one from The Guardian and one from The Star Press, for more extensive obituaries, including some history that places Mary Travers within the social, political, and artistic context of the time.
Posted by John Edward Harris at 9:43 AM