Welcome to My Neighborhood: Subway 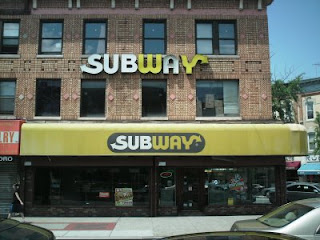 Sometimes I ride the Subway and sometimes I eat Subway. I usually do not eat national brand fast food. One of the few exceptions is Subway. Even before Jared lost all his weight I appreciated both the speed at which a Subway can prepare its subs as well as the fresh baked rolls from which those subs are made.

Being a creature of habit my tastes do not very much. I used to prefer the BMT on white bread but after becoming a little more health and weight conscious I now prefer a six-inch roast beef on honey oat, no toast, no cheese, with lettuce, tomatoes, green peppers, black olives, banana peppers, black pepper, oregano, and a little sweet onion dressing (one swipe). My wife’s favorite is a six inch turkey on hearty Italian, no toast, no cheese, lettuce, tomatoes, onion, green pepper, black pepper, cucumbers, spinach, jalapeño peppers, oregano, parmesan cheese and vinegar. We usually get the meal deal with baked chips and soda (half Diet Coke, half Cherry Coke). 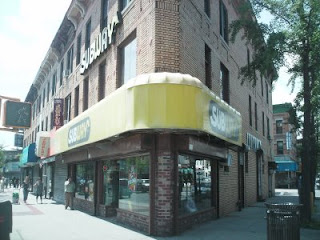 When my wife and I first moved to Ridgewood almost two years ago we frequented our local Subway franchise at 56-53 Myrtle Avenue (front view pictured top right) daily as we were unpacking. We went there so often our first few weeks and months in the neighborhood that some of the people that work there not only came to recognize us but remembered what we always ordered. They now miss us when we do not go there and when I show up by myself they ask about my wife.

The Subway at the corner of Myrtle Avenue and Seneca Avenue (corner view pictured middle right) in Ridgewood has been owned and managed for the past fourteen years by George. His wife Rose is his constant helper. Rose and George came to America from India twenty or twenty-five years ago. Felix, a young and recent hire, was also in the shop the most recent time I was there. That is Rose and Felix pictured bottom right. George was camera shy.

While I was in Subway a recent Sunday afternoon I witnessed a steady stream of customers effectively served by Rose and Felix taking the orders and making the sandwiches and George working the register. Perhaps those customers were drawn into the establishment by the aroma of the fresh baked bread, an enticing bouquet I could smell and appreciate from across the street as I approached. George and Rose provide five tables for eat-in customers and so can handle about twenty people in the corner shop, plus take-outs.

What George likes most about being in business in Ridgewood is that, in his words, Ridgewood is a “decent, peaceful, clean place where the people are nice.” He said he has had only one problem in his fourteen years in business but did not elaborate and I did not pursue with further questions. 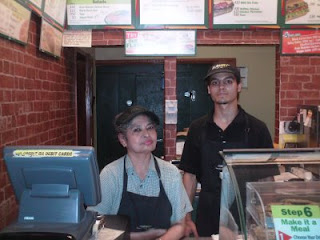 When I asked George how the current recession was affecting his business he sounded like a British economist bullish on America, citing unemployment trends and putting a positive spin on them. He sees the current recession as a passing storm, a storm we will weather, and a storm that will clear by the end of the year if not in the near future. While his shop’s profitability is down he has not noticed a reduction in customer traffic.

If George could communicate one thing to potential customers that are not acquainted with Subway in general or his Subway franchise in particular, it is that the food is fresh, non fattening and that “tasting is believing”. I’ll eat to that!
Posted by John Edward Harris at 8:19 AM

Email ThisBlogThis!Share to TwitterShare to FacebookShare to Pinterest
Labels: Ridgewood, Subway, Welcome to My Neighborhood