And the Rocket’s Red Glare 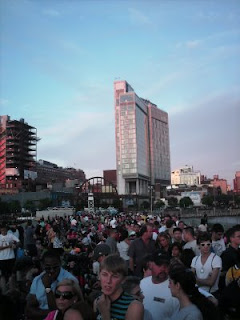 According to an article in the online edition of the New York Times, New York’s July 4th fireworks display was the largest in the country. Vicki and I watched the pyrotechnics from near the western end of Pier 54 jutting out into the Hudson toward New Jersey. A crowd filled in behind us 9pictured top right). We arrived around 8:15 PM expecting the show to begin at 9:20. The fireworks actually began around 9:25 and lasted for at least thirty minutes.

This was only the second time I have watched New York’s July 4th Fireworks. The first and only other NYC fireworks I watched were a few years ago before we had moved to the city and were visiting friends here. It was a chilly and wet July 4th and a down pour preceded the fireworks, softening to a drizzle as the show began. While the fireworks were impressive the setting on the FDR drive was not.

As we walked out onto Pier 54 I was particularly impressed by the NYPD’s crowd control. Ditto for after the fireworks display (pictured bottom right). The crowd itself seemed more relaxed and congenial than I was expecting. Perhaps the Obama administration, or the recession, or the dysfunction in Albany has softened normally gruff, pushing and shoving New Yorkers. 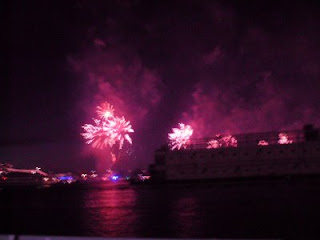 I was also impressed with how the six barges of fireworks were synchronized and coordinated. Surely there was some computerized control involved. If our State Senators could only be as coordinated as the fireworks and congenial with each other as Saturday night’s crowd, we would not have the mess in Albany that we have.

At the conclusion of the display it seemed like every ship in the Vicinity, from yachts to sailboats to small craft blew their fog horns. The crowd then erupted in applause.

Thanks, Macy’s, for another memorable Fourth of July fireworks display.
Posted by John Edward Harris at 10:20 PM