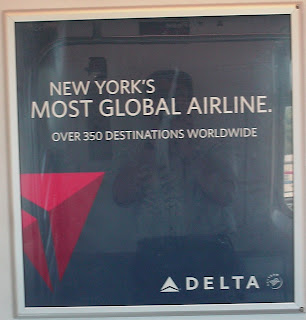 It is a Sunday afternoon around 3 PM. I am on the subway platform at the 14th Street Station waiting for the 2, the 7th Avenue Express through Manhattan and a local in the Bronx. I do not ride the 2 often, maybe once or twice a month, and usually between 14th Street and 96th Street. The farthest north I have ever taken the 2 is Gunn Hill Road in the Bronx.

My ringing cell phone surprises me because I usually do not have reception underground. It is Nadira. She wants to know if I am still coming, if have the address, and if I need any directions. Nadira and I have never met (as far as we know) but have exchanged emails and talked over the phone. I am on the way to meet her and her family, all of whom I have never met, not at her home but at the home of Ken Ragbir. This is not a blind date arranged by E-Harmony but a follow up to a couple of my posts to my blog Summit to Shore. It is amazing where the internet can take a person and I am wondering how this journey will change me.

The 2 pulls up, doors open and I walk into the front, northernmost car. There are fifteen others in the car. At first I think of my surroundings as a “blue Delta” car because the plastic seats are blue and the Delta Airlines advertisements (photo top right) near the top and on the side wall across from me are blue. I eventually realize that the ads on my side of the car are red Verizon ads (photo middle right). Depending on which side of the car one is sitting on can affect perception. Perhaps life and death are only matters of perception as well, but there is very little communication across the great divide between the living and the dead.

At Penn Station more passengers board than leave. At Times Square enough people enter the car to make it standing room only and at least a dozen people are standing as we leave the station. 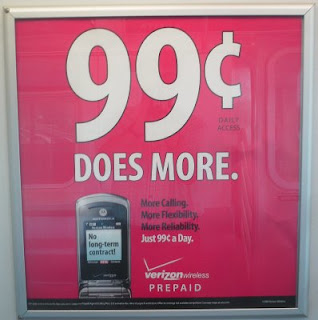 There is a mass exodus at the 96th Street station. As the train continues north from the platform there are now only eighteen passengers left in the car.

Somewhere between 135th Street and the 149th Street we leave Manhattan, pass under the Harlem River, and enter the Bronx.

Between 3rd Avenue and Jackson Avenue we leave the dark subterranean world of subway tunnels for the light of day of an elevated track. Plato would have welcomed the transition. Sometimes the shadows of the valley of death feal more familiar, however, than the light of goodness and mercy.

As the 2 pulls out of the Gunn Hill Road Station, the farthest north I ever been, there are only seven of us still in the car. I am now exploring new horizons. I have no idea what lies ahead and where the tracks are taking me other than the colors, lines and words on an MTA New York City Subway map. Some journeys are not related to geographic reference points, however. After five more stops I will be walking toward and eventually into Ken’s home. No map made of paper and ink could orient me for that.

The train halts just yards away from the Wakefield-241st Street Station and sits motionless as we wait for another train to clear the platform. There are now only three of us left in the car. The woman across from me has been on the car since when I got on at 14th Street. We have been sitting across from one another for 227 blocks and 60 minutes. I am not sure we ever made eye contact. I certainly do not know her name. I wonder where she is going and who she will be meeting. I am not sure about the woman at the very end of the car. Was she in the car when I boarded or did she get on later? 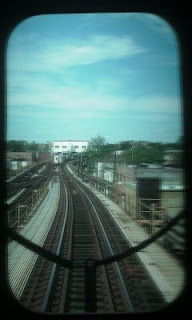 Finally we pull ahead into the station (photo bottom right) and the end of the 2 line. According to the MTA map I am at the northernmost station in the New York Subway system and farther north in the Bronx that I have ever been before. As I leave the car, step onto the platform and enter the station, it looks and feels other than what I was expecting. I am impressed by how new and clean it appears, especially in comparison to some of the Manhattan and Queens stations. I was expecting something more run down, rougher, and dirtier. I do not even see any graffiti on the walls or litter on the floor.

Climbing down the stairs from the elevated station to street level I am again impressed, this time by the neighborhood. I am no longer in Ridgewood. This is not Fort Apache. I am certainly no longer in Kansas, but it is not Oz either. I am in the midst of generally well kept single family homes rather than the row houses I am more familiar with. I pass by a closed Lutheran Church, a for sale sign adorning its front fence. I think its location, so close to the subway, might make it a good location for a retreat center. I wonder what it looks like inside.

As I walk the few blocks up to Ken’s home I see small yards with grass, most well cared for. I smell burning charcoal and hamburgers being grilled. I hear music and conversations emanating from open windows. In the midst of death there is life. In the midst of mourning people still talk, listen, cook and eat. I wonder how many times Ken rode his motorcycle up and down this street.

I am now standing across the street from Ken’s home. What am I doing here? What am I about to walk into? I cross the street, see two doorbells and press the appropriate button. I hear sounds.